Britain's Demands Anger Some Members of the E.U. at a Major Brussels Summit

David Cameron and Angela Merkel during a EU Summit in Brussels, Belgium on Feb. 18, 2015.
Wiktor Dabkowski—dpa/Corbis
By Shona Murray/Brussels

The U.K.’s quest for a shift in its relationship with the E.U. is likely to pass its first major hurdle at the end of a two-day summit of European leaders in Brussels that began on Thursday. If all goes well, an eventual ‘in-out’ referendum on Britain’s membership in the European Union—one that could have far-reaching consequences for the U.K. and the E.U. alike—could be put to the U.K. public as early as June.

Striking a confident tone upon his arrival at the summit, British Prime Minister David Cameron told journalists he was “battling for Britain” and would walk away if a “good deal” was not secured. However, the substance of Cameron’s eventual deal is likely to draw criticism from not only the euroskeptics in the Prime Minister’s own party and the anti-E.U. U.K. Independence Party (UKIP), but also from those who believed the purpose of the negotiations will fundamentally—and unfairly–alter Britain’s relationship with the E.U.

In Brussels, the U.K. government is working to secure a commitment to “competitiveness” and a reduction in the burden of bureaucratic legislation within the E.U.—something most member states would approve of. He also secured agreement on other concessions, including the right for national parliaments to stop E.U. legislation from being introduced if 55 per cent of parliaments agree.

None of these dramatically steer the E.U. to a different course or fundamentally change the U.K.’s relationship with the E.U. Addressing her national parliament before the summit, German Chancellor Angela Merkel said David Cameron’s demands were “understandable and justified” and said she fully agreed with his push for “competitiveness and reduced bureaucracy.”

But that’s the easy part. Cameron also wants the right to have a say in financial legislation agreed by countries using the euro currency in case it impacts non-euro countries, and in particular, the city of London. (Though a member of the E.U., Britain opted out of the euro and retained its own currency, the pound.) French President Francois Hollande made his concerns clear earlier in the day, saying that “no country should have a veto” on such legislation.

Ultimately, though, the two most contentious issues on the table are the curtailment of access to special in-work benefits for non-British E.U. citizens working in the U.K,, and the reduction of child benefit rates for non-British E.U. citizens whose families live overseas. Those in-work benefits are seen as a generous part of the U.K.’s policy of attracting low-skilled people back in to the work force and the U.K. says they should not apply to citizens who are from outside the country until after they’ve worked there for four years. Cameron also argues that it should no longer be possible for low-skilled workers who contribute very little or no tax to the economy to be entitled to almost double their salary because of housing and other benefits. And the British government has long argued that its exchequer should not pay the same amount of child benefits as those earned by U.K.-based families to children who live in E.U. countries where the cost of living is much lower than in Britain.

Those last two points are among the greatest obstacles for an overall deal. The opposition will be led by David Cameron’s counterparts from Eastern and Central European countries like Poland and Hungary, whose citizens—hundreds of thousands of whom have emigrated to Britain—will be the most affected by any new rules. The arrangement would mean that any E.U. migrant worker in the U.K. with children living outside the UK would be paid child benefit at local rates—far below what their British counterparts would be given.

Defending the deal, senior British government source says the reforms “satisfy the UK’s own version of European membership” which address the British public’s “concerns” with the E.U. But it’s still far from clear that the deal, should it be struck, will be enough to convince British voters to stay in the E.U. 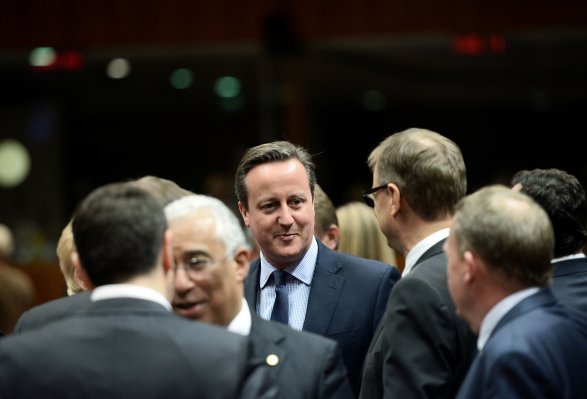 This Summit Could Decide Whether the European Union Remains United
Next Up: Editor's Pick