President Barack Obama in the Oval Office at the White House, in Washington, D.C., on Feb. 17, 2016
Chip Somodevilla—Getty Images
By Mark Rivett-Carnac

President Obama is planning a trip to Cuba as part of his tour of Latin America in March, he announced early Thursday, which would make him the first American president to visit the island in almost 90 years and mark a significant step in the normalization of relations between the two countries.

The President and First Lady Michelle Obama will be in Cuba from March 21 to 22. Obama will meet with Cuban President Raul Castro and look to further develop diplomatic and commercial relations with Cuba during his visit, the White House said in a statement.

Obama first floated the idea of visiting Cuba in December as part of efforts to normalize ties between Havana and Washington. The Cold War foes pledged in December 2014 to restore relations after more than a half-century freeze.

As part of the diplomatic thaw, officials signed a deal on Tuesday opening the skies for commercial flights between the two countries, and embassies were reopened last summer. Despite the headway, commerce remains limited by a U.S. trade embargo.

A Presidential visit would mark a turning point in U.S.-Cuba relations and a potential triumph for Obama’s foreign policy legacy. But the plans quickly drew criticism from Republican presidential candidates, including Ted Cruz and Marco Rubio, both the sons of Cuban immigrants.

Following the Cuba trip, the Obamas will travel to Argentina and meet with its new president, Mauricio Macri.

If he makes the 90-mile hop across the Straits of Florida, Obama will be the first sitting U.S. President to travel to Cuba since Calvin Coolidge in 1928, according to ABC News. 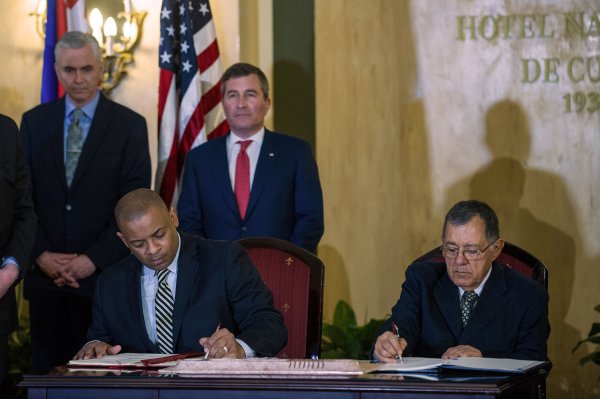 Why U.S. Airlines Are Rushing to Apply for Scheduled Flights to Cuba
EDIT POST