Ankara Bombing the Latest in Turkey's Deadly Cycle of Violence

At least 28 people were killed by a powerful explosion in a heavily guarded district of Ankara on Wednesday, just the latest deadly attack in a country whose entanglement in Syria’s civil war and domestic conflict with armed Kurdish groups has seen it become a frequent target for militants.

According to Turkish officials, the blast came from a car loaded with explosives, targeting a convoy of military vehicles as it passed through the heart of the capital near the parliament, Interior Ministry and military headquarters.

Security-camera footage published by the Turkish newspaper Hurriyet shows fire and smoke engulfing the street and sidewalk at the moment of the blast. A Turkish news agency video taken in the aftermath showed a fire raging as emergency vehicles raced to the scene. At least 61 people were injured in the bombing.

“This attack openly targets our entire nation. We condemn those who carried this attack, those who use them as tools, and those who give logistical, intelligence and even political support to such attacks,” said Deputy Prime Minister Numan Kurtulmus, according to Hurriyet.

There was no immediate claim of responsibility for the bombing, which comes only a month after a bombing killed 11 German tourists in Istanbul. The capital itself was targeted before as recently as October, when a double bombing of a peace rally killed at least 100 in the deadliest attack of recent times. Both were blamed on the militants of ISIS, the jihadist group that controls much of Iraq and Syria.

These attacks form part of a widening spiral of violence that has unfurled in Turkey since the summer of 2015, when a suicide bombing blamed on ISIS killed at least 33 people in the town of Suruc, primarily volunteers working to aid the Kurdish town of Kobane, in Syria, which withstood a siege by ISIS in 2014.

The attack in July demonstrated ISIS’s willingness to strike inside Turkey. It also helped trigger renewed fighting between Kurdish fighters and the Turkish state, who have fought an intermittent war for some 30 years. Many Kurds blamed the state for failing to restrain the jihadists, a charge the government denies.

Read more: This Man Has the Toughest Job in Turkey

As well as ISIS, Kurdish militants have also carried out attacks, primarily targeting police and military forces. In December, a Kurdish faction claimed responsibility for a blast that killed one person at one of Istanbul’s airports.

Wednesday’s bombing in Ankara also comes at a moment of intensifying conflict between the Turkish state and Kurdish armed groups in Syria. This week Turkish artillery fired on Kurdish fighters who are advancing on towns held by predominantly Arab Syrian rebel groups. Those advances come in the wake of a major Russian-backed offensive by Syrian regime forces, which have forced tens of thousands to flee their homes in northern Syria.

Inside Turkey, the security forces are currently pursuing a clampdown on the armed Kurdistan Workers’ Party and local Kurdish demonstrators across the southeast of the country in an ongoing confrontation that is beginning to resemble a slow-burning civil war.

In reaction to the bombing in Ankara, Turkey’s President Recep Tayyip Erdogan canceled a scheduled visit to Azerbaijan, while Prime Minister Ahmet Davutoglu also canceled a planned trip to Belgium. 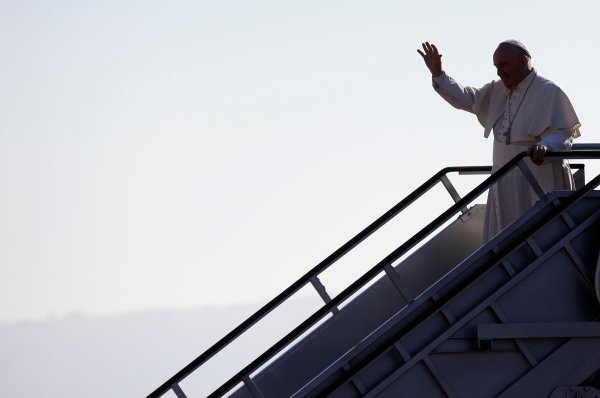 Pope's Plane Hit With Laser Beam
Next Up: Editor's Pick