President Barack Obama announces his appointment of former IBM CEO Sam Palmisano and Tom Donilon to the the newly-created Commission on Enhancing National Cybersecurity in the Oval Office at the White House on Feb 17, 2016 in Washington.
Chip Somodevilla—Getty Images
By Maya Rhodan

President Obama is hosting an intergenerational group of civil rights leaders, including Black Lives Matter activists, for a first-of-its-kind meeting at the White House as the Administration celebrates the first black President’s final Black History Month.

The Thursday meeting, before the annual Black History Month reception at the White House, will include the National Action Network’s Al Sharpton and National Urban League President Marc Morial, along with several young grassroots activists, including Aislinn Pulley, the co-founder of Black Lives Matter Chicago, and DeRay McKesson, a co-founder of We the Protesters and an active voice in the Black Lives Matter movement.

Administration officials say Obama wanted to bring both groups together so they can find ways to work together as the President goes after his legacy goals of criminal-justice reform and a better relationship between police and the black community. Attorney General Loretta Lynch will attend the meeting as well.

President Obama faced criticism throughout his first term for not doing enough to boost the black community, despite the pivotal role black voters played in getting him elected. In his second term, particularly as his time in office winds down, the President has spoken more bluntly about issues facing communities of color. In February 2014, he launched My Brother’s Keeper, which works to expand opportunities for brown and black young men and boys. Last year, after facing pushback from women for leaving girls out of the efforts, the White House hosted a summit and pledged $100 million worth of support for young women and girls.

Recent high-profile killings of young black men by police and disparities in the U.S. criminal-justice system have also pushed the Obama Administration to tackle some systemic issues facing the black community, issues that activists in the Black Lives Matter movement helped bring to the forefront of national conversations.

Thursday’s meeting could prove an opportunity for young activists of the Black Lives Matter movement and the old guard of the civil rights movement to air their grievances. The two groups have had some tense moments in the past. During a speech in Atlanta, Black Lives Matter protesters interrupted Democratic presidential candidate Hillary Clinton, leading civil rights icon and Congressman John Lewis, who’d just introduced Clinton, to intervene. In an interview with BuzzFeed News, Lewis said while he respected the activists’ enthusiasm, “we have to respect the right of everybody to be heard.” During a 2014 rally in Washington, D.C., young protesters rushed the stage to express their discontent with the way Sharpton’s National Action Network was handling a “Justice for All” march.

Requests for comment from some of the invited guests were not immediately returned. 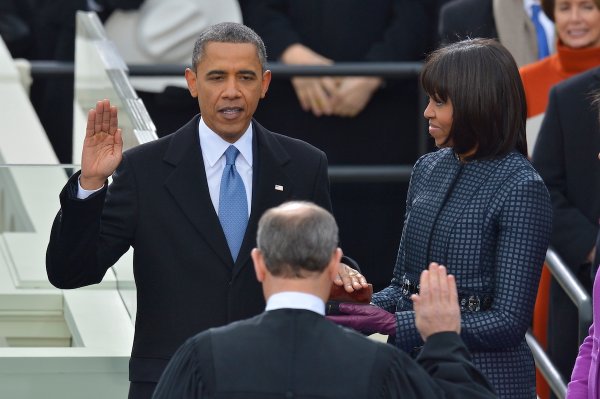 'So Help Me God' and the Presidential Oath
Next Up: Editor's Pick