The Texas man who was arrested at his home over unpaid student loans said he armed himself after feeling threatened by two federal deputies who ambushed him in his front yard disguised as utility workers.

Paul Aker’s encounter with the U.S. Marshals Service on Feb. 11 quickly went viral after he appeared on a TV news station, recalling how a group of rifle-toting marshals dressed in combat gear showed up at his Houston home over $1,500 in outstanding loans.

Authorities said they had a warrant for Aker’s arrest after he failed to appear at a 2012 federal court hearing over a delinquent student loan from almost 30 years ago. Two deputies called for backup after they said Aker “resisted arrest and retreated back into his home,” the U.S. Marshals Service said in a statement. The situation escalated when the other deputy marshals arrived and Aker shouted that he had a gun, the agency said.

But the 48-year-old told TIME on Wednesday that the two initial deputies never identified themselves as law enforcement officers or told him he was under arrest. At least one of the men was wearing a hard hat and a utility worker’s uniform when he drove into Aker’s driveway in an SUV and confronted him, he said. “You jumped out at me. I don’t know you,” Aker said. “I thought, ‘I’m about to be robbed.’ It’s horrible. This is a nightmare.”

The two deputies drove away after Aker went back inside the house, he said. They returned at 10 a.m., about two hours later, with local police officers and a handful of heavily armed deputy marshals, Aker said. “I’m thinking, ‘Who is that guy and what was that about?’ I sit down in my living room and then boom, boom, boom on my door. ‘U.S. Marshals. Open the door,’” Aker recalled. “I yelled, ‘I have a gun!’ I had just heard about fake police breaking into peoples’ homes in Houston. I thought it was that guy in the hard hat. I thought this was about to be a robbery.”

Aker said he looked out of his window and saw uniformed law enforcement officers standing outside. He said he removed the ammo from his gun, left the weapon on the counter and walked out of his house with his hands in the air in under two minutes. “I say, ‘Hey, I’m here. I’m here.’ They put me to the ground,” he recalled.

Aker said he was shackled by the ankles and waist when he arrived moments later to appear before U.S. District Judge Lynn Hughes. He now has to pay back about $7,000 — nearly five times what he owed — including interest and expenses related to his arrest. “I’m still baffled,” he said. “I was just floored. I was shaking. I wanted to cry.” The freelance audio engineer said he was never notified that he owed any money. The student loans, which he said he had consolidated, didn’t appear on his credit reports either, he said.

Americans hold more than $1.3 trillion in outstanding college loans, which have higher delinquency rates than any other type of personal debt, according to the St. Louis Federal Reserve. The average student-loan debt has increased 45% since 1995.

U.S. Marshals Service spokesman Alfredo Perez told TIME on Wednesday that Aker’s incident was an extreme case. “We don’t want people to think that just because they have student loans, we’re going to come and arrest them. That’s not the case at all. We’re not going after everybody,” he said. “I’ve been doing this for 20 years, and this is the only time I’ve ever seen somebody go to this extreme to avoid service.”

Perez said the U.S. Marshals Service annually go after about 25 Houston-area residents who miss court appearances over unpaid federal loans. He added that one of the deputies was indeed wearing a hard hat and plain clothes but said his partner, who was wearing a jacket with the U.S. Marshals’ seal, did identify himself.

The U.S. Marshals Service said it serves civil processes, including summonses for individuals to appear in court to address delinquent federal loans, at the direction of federal courts. It had been searching for Aker since November 2012. The agency told TIME that about 1,500 people in Houston have missed court appearances over outstanding student loans, but they have not yet been contacted to address their debt in court and are not facing arrest warrants regarding their debt.

“It’s crazy. All of that for a student loan. All that manpower for $1,500,” said Aker, who is now considering taking legal action. “You guys came to my house with guns over a student loan? Just knock on the door. We would have laughed about it. I would have gotten in the car. It’s all preposterous.” 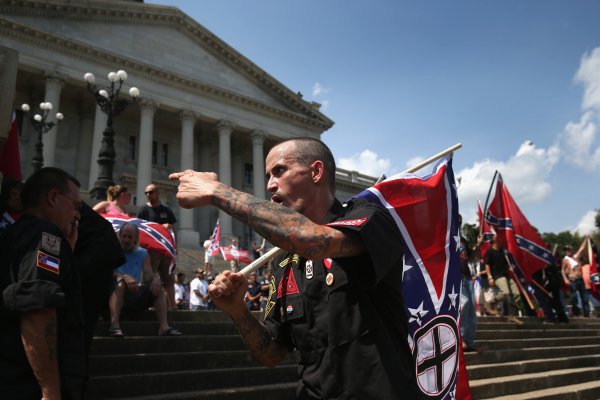