President Obama’s rejection of the Keystone XL pipeline last fall turned the phrase “keep in the ground” into a rallying cry for activists hoping to stem the effects of climate change. The argument was a simple one—if the White House wanted to reduce U.S. greenhouse gas emissions, it should stop allowing oil and gas drilling on federal land.

The White House has never said it was adopting such a strategy, and in the past, Obama has boasted about the increase in domestic oil production during his time in office. But at the same time, a little-known federal agency has quietly accomplished much of what climate activists have called for. In recent months, the Bureau of Land Management (BLM) has postponed or canceled a series of lease sales that would have opened additional public territory to oil and gas drilling. Official explanations for the delays have ranged from needing to find a larger venue for the sales to finishing a consultation process with tribes, but protesters and energy interests believe something else is at work—and they’re taking the credit.

Since Obama’s decision on Keystone, representatives from environmental groups like 350.org, Friends of the Earth and the Center for Biological Diversity have shown up by the dozens wherever land auctions have been scheduled. A total of five such auctions have been cancelled or postponed since Obama’s Keystone announcement, while another four have proceeded as planned, according to the BLM. “It’s been an amazing few months,” says Jason Kowalski, policy director at 350.org. “Seeing these auctions cancelled or postponed has been very heartening. Keeping fossil fules in the ground is quickly becoming one of the top tests of climate leadership.”

For its part, BLM says the lease postponements are routine and unconnected from politics. No auction has been cancelled outright, but “from time to time, a variety of factors necessitate the rescheduling of sales,” according to Jeff Kraus, a BLM spokesperson. “When a sale is rescheduled it does not mean that fewer parcels will be offered.”

The energy industry is skeptical. Each BLM region is required by law to hold a lease auction every quarter so long as land is available for auction within the scheduled area. A number of small policy changes enacted under Obama have slowed the internal processes of preparing for auctions and conducting the environmental analyses required to actually drill for oil or gas, according Kathleen Sgamma of the Western Energy Alliance, which represents energy companies. Sgamma points to an auction cancelled recently in Wyoming as an example. The BLM said openly that it couldn’t complete its internal processes in time to hold the auction. “If the government lacks the will to move forward, it doesn’t have to put a new policy in place,” she says. “It can just slow everything down.”

The changes have also caught the attention of more than a dozen Republican members of Congress, who described the postponements in a letter to the agency as “nearly universal failure by the BLM to uphold its statutory duty.” The lawmakers went on to suggest that the BLM seemed to be operating under undue influence from environmental groups, and called for the federal prosecution of anyone who tries to block an auction. “We question the validity of the excuse,” the letter says in response to the Utah postponement. “The postponement is unjustifiable.”

Despite the complaints of industry and Republicans in Congress, falling oil prices have made the need for rapid-fire lease sales less necessary, and energy companies less interested in bidding for leases. Indeed, many leaseholders have sought to slow their development efforts to avoid stranded assets. One federal sale held in Nevada late last year didn’t generate any revenue. “Oil stocks are stumbling and the companies are hurting financially,” says Mark Squillace, a professor of environmental and natural resources law at the University of Colorado in Boulder. “They’re seeing what’s happening to their coal counterparts and they don’t want to be stuck with a lot of assets that aren’t paying off.”

Obama has acknowledged the “keep it in the ground” movement more explicitly when it comes to coal, the biggest single energy contributor to man-made global warming. He announced a moratorium on new leases on federal land for coal mining following his State of the Union Address in January, a policy that goes along with the Environmental Protection Agency’s rules that will reduce dependence on coal power. Obama also seemed to gesture toward the “keep it in the ground” movement in his statement announcing the rejection of Keystone. “We’re going to have to keep some fossil fuels in the ground rather than burn them and release more dangerous pollution into the sky,” he said in November. “We want to prevent the worst effects of climate change before it’s too late.”

Environmentalists say the postponements are a step in the right direction, but they’re not enough. One activist—the author Terry Tempest Williams—purchased more than 1,700 acres at an auction in Salt Lake City this week for the sole purpose of stopping oil development after demonstrations failed to halt an auction. “You cannot define our definition of energy,” Williams said when asked if she would use the land for a legitimate purpose.

Activists are gearing up for what they say could be their largest demonstration yet in advance of a March auction at the Superdome in New Orleans. The location will make news itself—a site closely associated with the devastation of Hurricane Katrina, a weather event some have argued may have been exacerbated by climate change. “The political consensus is shifting,” says Kowalski. “Digging up all the fossil fuels under U.S. soil and selling them to the highest bidder is not longer seen as in sync with our climate commitments.” 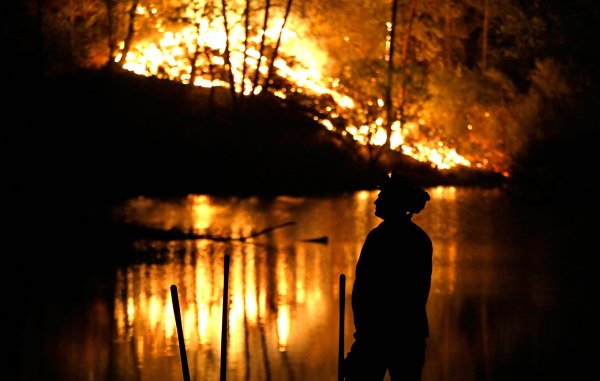 Forest Service at 'Tipping Point' Because of Wildfires
Next Up: Editor's Pick