Why This Cowboy Painter Is Watching the 2016 Race Closely

But this November, he’ll be looking closely at the winner of the presidential election.

Painted in 2008, the original “Grand Old Gang” oil on linen canvas sold at a San Antonio gallery to an unnamed buyer for “well over” the typical $60,000 price of one of Thomas’ Western-themed pieces, while two limited-edition runs of signed giclée on canvas prints in different sizes have sold out and countless prints and notecards have been sold at gift shops and galleries around the country. (Especially in Washington, D.C., where they are a staple of local gift shops.)

Most people buy one or the other, and Thomas jokes that the few who buy both are using one of them for “dart practice.”

After President Obama’s inauguration, Thomas revisited the theme for an updated portrait which features Obama joining the group for a game of pool. No matter which side prevails in November, he expects he’ll need to do another portrait.

“I’m clearing my slate,” he told TIME. “I kind of go back and forth about what setting to put them in. … Poker was great because the men have to sit close and you can get the heads a certain size. Pool was a little different because the table is so big, it’s hard to get portrait-sized pictures into the painting. We’ll see.”

Read More: What Hillary Clinton’s Campaign Can Learn From Etsy

A self-taught artist, Thomas worked as a graphic designer for an in-house ad agency for a large manufacturing company for years. Around the time he became department manager in his early 30s, he decided that if he stayed much longer, they’d be paying him too much money for him to ever leave, so he quit to pursue his dream of becoming an artist.

For a decade, Thomas painted pretty much anything that might sell, then loaded them into a van and drove with his wife, Dina, to art fairs.

“I had this huge variety of artwork,” he recalls. “There’d be a still life, a Western, a nude, a ship painting, a basket of fruit. I just painted anything I thought would sell.”

That attitude carried over as he became more successful and shifted primarily to Western-themed paintings. When the owner of Somerset Fine Art, which sells his prints, suggested a presidential portrait, he was game.

“People are disappointed when they hear that,” he said. “They want the artist to have thought of everything. But part of creativity is listening to other people’s ideas too.”

The biggest challenge for Thomas was getting the presidents’ faces right. Because he couldn’t afford models when he started out, he had learned to paint by making things up, but now he had to paint some of the most recognizable faces in America. He spent hours pouring over photographs—as a resident of rural Carthage, Mo., he has never met a president in person—looking for expressions that would fit at a poker game.

“The most challenging was a truly smiling Richard Nixon,” he said. “He had his campaign smile, which you know was kind of a grimace actually, and it was hard to find a photo where he seems to be truly joyful, whereas Eisenhower laughed a lot.”

Thomas threw a few small touches in the paintings: FDR, the New Dealer, is dealing the cards; Reagan is snacking on jelly beans; Gerald Ford is smoking a pipe and Harry Truman is wearing one of his favorite Hawaiian shirts and drinking a Bourbon.

He also worked hard to avoid making any statements inadvertently. In an early sketch of “Grand Old Gang,” Nixon was holding his cards close to his chest, but Thomas felt that made him look too paranoid, while he added a tie to an initially tie-less Clinton after he seemed too informal.

Thomas, 58, said reading about the presidents made him start to like all of them as human beings, although his favorite two politically were Reagan and Clinton. He doesn’t have a favorite in the current election on either side, though there was one he briefly hoped might join the next painting. 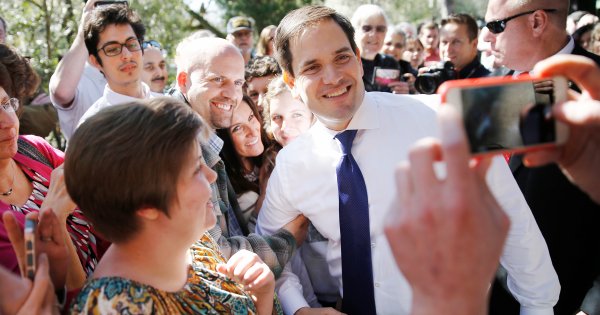 Rubio Appears to Chuckle at Voter Suggestion to 'Waterboard Hillary'
Next Up: Editor's Pick