A Brief History of Cursing in American Politics

One new anti-Donald Trump ad being run by Jeb Bush supporters in South Carolina doesn’t exactly mince words: the clip relies on soundbites of Trump using vulgarities during political discussions to portray him as unpresidential and lacking in values.

But Trump isn’t the only person in American political history to use the odd expletive to make a point. Others like Rand Paul and Jeb Bush—yes, Jeb Bush, though generally in a much gentler way—have used strong language in their campaigns, so much so that some observers have called the trend a sign of a pro-profanity cultural shift. Nor is that trend limited to candidates: President Obama and Vice President Biden have both been known to let a less-than-polite word slip.

To be fair, other observers drew the same conclusion from the politics of 2012—and, while the words used have evolved, political cursing has a long history in U.S. politics. After all, it was George Washington himself who “swore … till the leaves shook on the trees” after the Revolutionary War’s Battle of Monmouth Courthouse.

Modern political profanity, however, can be traced back to the 1948 election, when President Harry Truman acquired the nickname “Give ‘Em Hell Harry” for the force of his ultimately successful campaign to stay in the White House. (“I never did give ‘em hell,” Truman would later say. “I just told them the truth and they couldn’t stand it.”) Though that particular four-letter word may sound barely worth mentioning, it was only about a decade later that, during a televised 1960 debate with John F. Kennedy, Richard Nixon would take Truman to task for his salty reputation, praising Dwight Eisenhower for having “restored dignity and decency and, frankly, good language to the conduct of the presidency of the United States.”

During that decade, even as so many cultural mores changed, presidents Kennedy and Johnson—the latter of whom could “fire out cuss words like buckshot” over drinks—mostly kept their appreciation for a good vulgarity to the private realm. The public use of an expletive by the President would still have been shocking. In the 1970s, however, Nixon, the man who had once promised to retain Eisenhower’s decency should he be elected, blurred the line between private and public. He also reminded the nation that the man in the White House wasn’t necessarily an exemplar of good conduct. The release of the Watergate tape in 1974 showed that his time in the White House had been anything but Rated G. “Those who have heard him speak in private say that the swearwords he commonly uses are both blasphemous and obscene,” TIME reported. “[They] include four-letter expletives that are salacious and scatological.”

What exactly the words were, however, was up to citizens to guess: the transcript of the tapes merely introduced the phrase “expletive deleted” to the popular lexicon. Even so, what they imagined was bad enough for many to take Nixon’s vocabulary as one more piece of evidence that the President himself had been less than decent.

In many ways, Watergate captured a crossover moment for cursing: a time when pernicious language was still seen as bad enough to indicate something about the soul of the speaker—a power retained these days by slurs but largely not by vulgarities—even as public usage of once-taboo terms was becoming far less surprising than it had been. Academics and average citizens alike were beginning to feel that some harsh language had a place in discourse, and the illusion that Americans were always polite in their personal lives was fading. In just three decades, Hollywood had gone from fighting over Gone With the Wind‘s right to use the phrase “give a damn” to OK’ing the first f-word in a major studio movie (M*A*S*H). And though presidential vulgarity could still make news (Jimmy Carter’s did in 1980) the idea of “giving ’em hell” was nothing to write home about—a state of affairs that has apparently continued to this day.

In fact, as one 2014 social psychology study suggests, there may be reason for the trend to continue: curse words, at least when used by male politicians, can make a candidate seem more likeable. 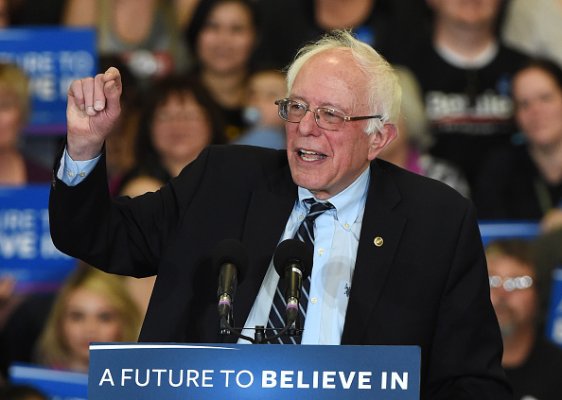 Bernie Sanders Met His Adorable Baby Look-Alike at a Las Vegas Rally
Next Up: Editor's Pick