Sibling rivalries can bring out the best in brothers. Jeb Bush’s rally Monday with former President George W. Bush was no different.

Former Florida governor Jeb Bush, who has long since shed his front-runner title, offered his most compelling argument for a third Bush White House. Confident and cogent, he finally resembled the ultra-competent candidate that his advisers promoted as they collected more than $120 million from deep-pocketed donors. “This is not about a front-running candidate,” he declared. “This is about restoring our country’s greatness.”

It’s not clear, though, if the pair’s first joint public event this campaign was sufficient. South Carolina Republicans vote on Saturday, and Jeb Bush, 63, is badly trailing celebrity developer Donald Trump and Texas Senator Ted Cruz in a state with deep Bush-family ties. If anything, he remains locked in a pitched battle with Florida Senator Marco Rubio for third place. Voters, for the moment, seem indifferent to matron Barbara Bush’s education here, George W. Bush’s primary win in 2000 and the clan’s deep popularity among military veterans. Even Bush supporters remain critical. “This was too little, too late,” said one Republican who has hosted fundraisers for the Bush campaign and its allied super PAC. The campaign veteran attended the rally and said it would help Jeb’s prospects. “This should have happened three months ago,” he said.

Indeed, the appearance of the 69-year-old former President marked a sharp turn of events for the candidate who sought to campaign as Jeb-with-an-exclamation-point rather than on last name. In a season of anti-Establishment fervor, it was the former President, himself the son of another, who defended the legacy. “If serving as President of the United States makes me part of the so-called Establishment, I proudly wear that label,” George W. Bush said, before introducing his “big little brother.”

However, on stage and off, it was clear which brother is the more natural politician. The bookish Jeb Bush rushed his way along the metal barricade that security put to keep the crowds in check, while his gregarious older brother lingered and relished the chance to practice the hand-to-hand politics that helped him win two difficult presidential races. One aide motioned for Jeb Bush to slow down, take the time to meet the voters. If George W. Bush could do it — and he had little more than pride at stake in this election — so could the man on the ballot.

George W. Bush left office deeply unpopular, with the wars in Iraq and Afghanistan dragging down his numbers more severely than the economic crisis destroyed the stock markets. But in the years since, his popularity has ticked upward. “History has 20/20 vision,” said Lyn Wadsworth, a 69-year-old truck driver from Charleston, who attended the rally. He wanted to hear President Bush, but left open to supporting his brother. “Look, was W. perfect? No,” Wadsworth said. “But he is better than Barack.”

Veterans of George W. Bush’s White House and his campaigns have been watching the younger Bush struggle in this campaign. George W. and his father George H.W. Bush have privately told friends that they do not understand the campaign and why voters are responding to Trump. Hundreds of family allies have been working the phones and pounding the pavement in the early states to boost the next Bush, efforts that thus far have little to show for themselves.

The elder Bush peppered his remarks with not-so-subtle references to Trump, the bombastic GOP front runner who threatens the future of the party to which their family has devoted generations. Trump had criticized George W. Bush at the last Republican debate for the invasion of Iraq, yet the 43rd President refused to return the fire on the same issue. “We do not need someone in the Oval Office who mirrors and inflames our anger and frustration,” the former President said. “This is a serious election for a serious job.”

He contented by contrasting Trump’s temperament with his brother’s at-times-milquetoast mannerism. “In my experience, the strongest person usually isn’t the loudest one in the room,” he said. He then reminded voters of their role. “Your most solemn job as voters is to elect someone who understands the threats that we face,” said Bush, who used national-security concerns to power a technically superior campaign in 2004. And in a nod to South Carolina’s deeply religious electorate, George W. Bush took a page from his 2000 campaign. “Jeb is man of deep and humble faith, that reveals itself through good works, not loud words,” he continued.

For his part, Jeb Bush credited his brother for “keeping us safe” after the attacks of Sept. 11 and criticized Trump for suggesting that W. should have been impeached for launching the Iraq War. He also took several veiled shots at his former mentee, Rubio, suggesting he “cut and run” on his support for comprehensive immigration reform.

But the candidate reserved most of his remarks for what he struggled to do for months: laying out an affirmative case for his election. “I can beat Hillary Clinton, I can promise you that,” the younger Bush said. But he’ll need his brother to give him the chance. 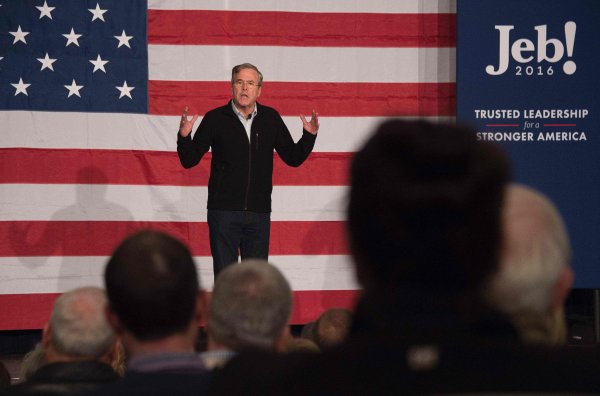 How Bush Hopes His Brother Will Help Him Win South Carolina
Next Up: Editor's Pick