To hammer that point home, he used the words lie, lying and liar six times in 90 seconds during one question he took from reporters on Monday. At other points, the real estate mogul called the Texas Senator dishonest, unstable and, for good measure, a Canadian.

“He’s a lying guy. A really lying guy. Some people misrepresent. This guy is just a plain-out liar. In fact, I felt better because Marco Rubio called him a liar the other night on stage,” Trump said. “I felt so much better. I said, ‘Good, a politician called a politician. Now I can call him a liar.’”

Faced with millions in negative ads on South Carolina airwaves from Cruz and former Florida governor Jeb Bush’s super PAC, Trump seemed to be on the defensive. Perhaps feeling the pressure, he called on Cruz to take down his ads — or face a lawsuit over his birthplace. It was one of the most transparently opportunistic and bullying moments of Trump’s already precedent-defying campaign.

“My only worry about South Carolina is that my opponents lie,” Trump said, revealing a crack in his signature confidence. “Especially Cruz. He’s the single biggest liar I’ve ever seen.”

The Cruz campaign is attacking Trump for his comments in support of Planned Parenthood, calls for gun control, support for national health care plans and use of eminent domain for private purposes. The criticism is all an accurate reflection of Trump’s prior positions, which he has since reversed.

The front runner insisted, without much in the way of rebuttal, that Cruz’s ads are misleading. If he doesn’t get them off South Carolina televisions — and soon — he would face a lawsuit claiming the Canadian-born Cruz is ineligible to serve. “I have a very good lawyer, already hired,” Trump said of the lawsuit, which has not been filed in any court. At the moment, the threat was more political press release than legit litigation.

The prevailing opinion of legal scholars of both political parties have said Cruz, who was born to an American mother in Calgary, is qualified — at least as far as the Constitution is concerned.

Trump’s press conference, ostensibly to talk about Guantánamo Bay, was truly a session to nurture grudges and settle scores. Ever the showman, Trump made this way through his rivals with his signature bluster.

His biggest grievance, however, was Cruz. The Tea Party favorite is Trump’s biggest competitor among voters who want an outsider as a nominee.

Sure, Cruz’s lies are brutal. But it seems as though Trump has a bigger problem with what he considers unfair.

Trump added that Cruz isn’t just a liar, but a bad one: “The good ones are the ones who can do it and not get caught,” Trump said, twisting the knife as he invoked Cruz’s campaign’s tricks against Ben Carson and controversial voter mailer in Iowa.

Trump also bristled at Cruz’s latest criticism of his sister, a liberal-leaning federal judge in New York. “Can you imagine my sister,” Trump marveled. “By the way, my sister was appointed by Ronald Reagan.”

In the deeply Christian state, Trump echoed criticism against Cruz leveled by Florida Senator Marco Rubio. “He goes around saying he’s a Christian. You’re going to have to really study that.” He later held himself up as a better man of faith. “I’m more moral than he is, in my opinion.”

Trump also levied attacks at Bush and Rubio, the latter for his disastrous debate performance in New Hampshire earlier this month.

“He’s a choke artist,” Trump said, with a wide grin. “We can’t have that as a President.”

Trump seemed to back slightly away from his suggestion that he blamed George W. Bush for the 9/11 terrorist attacks, but said he should be held accountable because it happened under his watch. “I would never say anybody is responsible,” Trump said with signature pique.

But he issued a threat to the former President that appearing on the trail with his brother makes him fair game. “If the President is campaigning for his brother I think he’s probably open to great scrutiny,” Trump said. When asked if he thought George W. Bush should stay out of the fray, he replied, “I think it’d be better for him.”

Cruz replied to Trump in a press conference Monday, lumping Trump and Rubio together. “Whenever anyone points out their record they simply start screaming, ‘Liar, liar, liar,’” he said. 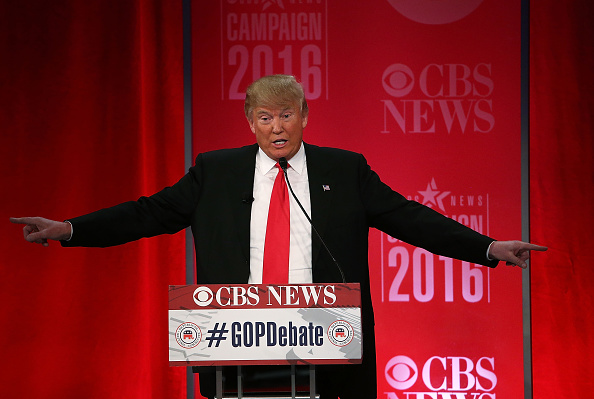 Anti-Donald Trump Ad Hits South Carolina Listeners With a Slew of His Expletives
Next Up: Editor's Pick