How Bush Hopes His Brother Will Help Him Win South Carolina

In Bush family lore, it was always Jeb, not George W., who was destined to follow in their father’s footsteps to the White House.

Fate intervened to propel the charismatic older brother over the more sober and wonkish heir. But 22 years later, the usurper may become the savior.

With his presidential campaign in need of a shot of adrenaline, the former Florida Governor is calling on George W. to bring some excitement in South Carolina with a joint rally in North Charleston Monday evening.

If there’s a state where this strategy could work, it’s South Carolina, where the polarizing former president remains deeply popular with Republican primary voters. But it’s also a risk for a candidate who long pledged to run “as my own man.”

The younger Bush is hoping his W. can drive home the message that “Jeb is ready to be commander in chief,” an aide said, as the campaign looks to build a coalition of chamber of commerce and national security conservatives in the state. The former president is expected to draw a contrast between his brother’s experience and Trump’s rashness, mirroring the Bush campaign’s message over the last several weeks. That message of readiness helped W. win a tough re-election campaign in 2004.

Bush is hoping to place ahead of Florida Son. Marco Rubio and Ohio Gov. John Kasich in the Palmetto State in the state to better his chances of unifying the establishment-friendly wing of the GOP that has yet to pick a favorite.

In recent weeks, the prospect of a family reunion on the campaign trail has provided a needed lift to Jeb’s effort. An ad featuring George W. Bush paid for by the super PAC Right to Rise began airing in South Carolina two weeks ago, and even earned air time during the Super Bowl, while Jeb’s mother, Barbara, campaigned for him in New Hampshire.

The appearance comes as GOP front-runner Donald Trump has escalated his criticism of the former president and the would-be president’s family. On the debate stage in Greenville Saturday night, Trump called W. a “liar” for his efforts to sell the Iraq War to the American people and suggested that family matriarch Barbara Bush should run instead of her son.

“I am sick and tired of him going after my family,” Jeb Bush said, crediting his brother with protecting the nation after the attacks of 9/11, only to have Trump retort that “the World Trade Center came down” under W.’s watch.

But in the conservative and military-friendly state, Bush is still beloved in many circles. “I miss W. and he’s coming back,” South Carolina Sen. Lindsey Graham declared as he introduced Jeb in Columbia Thursday. Bush launched a fundraising appeal off the Trump attacks on his brother Sunday, writing, “Here is the truth: George kept us safe.” But despite a rethinking nationwide, the eldest son is still not remembered fondly by many Americans, and bringing him on the trail could open up further familial vulnerabilities should Bush win the nomination.

But it is a bet Jeb must make—and one no one could have predicted when the brothers made their political debuts.

The 1994 election in with the two eldest sons ran for governor against incumbents in their respective states was nothing short of spectacle, sparking a generation of what-might-have-beens. But it also revealed the differences in the two men that have defined their converging political paths.

When Jeb decided to run for governor of Florida in 1994, his father, President George H.W. Bush told him to “go for it.” He offered less sanguine counsel to his brother W. that year when he decided to challenge incumbent Texas Gov. Ann Richard, telling him “you can’t win.” W.’s decision to run shocked the Bush clan and at the time the move rankled some members of the family, who watched W. pilfer pithy lines from Jeb’s stump speech.

Jeb told the Boston Globe it was “outright robbery.”

In a Republican wave year, Jeb, running as a “head-banging conservative” lost to Lawton Chiles, while W. defeated the liberal lion Richards. The pecking order of the family flipped, and it was the longtime family underdog George W. who claimed the presidency in 2000, not the political thinker who had been methodically collecting chits for years. The parents shook their heads in disbelief.

Where W. was a retail savant—the man Texas, and later America, wanted to have a beer with—the bookish Jeb was a relentless worker and intellectual. He focused on policy where his older brother mastered feeling.

Now, Jeb is hoping that his brother can bring those same skills to South Carolina. Privately, members of the Bush clan know that Jeb cannot win the nomination alone. 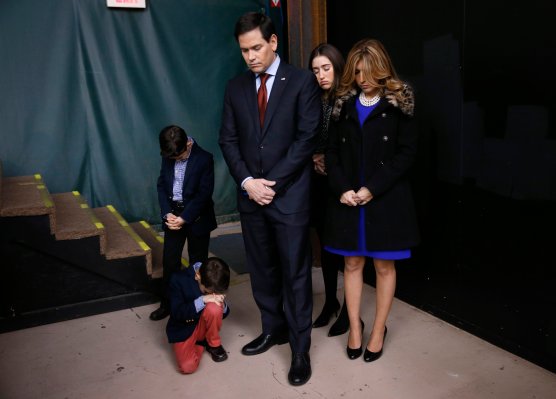 Rubio Keeps the Faith
Next Up: Editor's Pick