Russian Prime Minister Dmitri Medvedev during a meeting with the Bavarian state premier in Munich on Feb. 13, 2016
Sven Hoppe—picture-alliance/dpa/AP
By Simon Shuster / Munich

Russia has no plans to stop its bombing campaign against rebel positions in Syria until Moscow’s allies in Damascus can achieve peace on favorable terms, Russian Prime Minister Dmitri Medvedev tells TIME in an exclusive interview. As for the targets of the Syrian regime’s ongoing offensive around Aleppo and other cities, he said that rebels “who run around with automatic weapons” should be fair game — not only the terrorists of the Islamic State of Iraq and Greater Syria.

“They are all bandits and terrorists,” the Prime Minister said on Saturday in a wide-ranging interview in Munich, where he was leading the Russian delegation to an annual conference on global security. “They move around amongst themselves for various reasons: They get paid more somewhere else, or somebody has a falling out with somebody else. So it is very difficult for us to tell the difference between the very moderate ones and the not-so-moderate ones, the good from the bad.”

His remarks came one day after top-ranking diplomats from Russia, the U.S. and 15 other countries reached a U.N.-brokered deal in the southern German city to end the hostilities in Syria. But Medvedev left little room to hope that the peace deal would actually take hold. Its hard-won provisions, he said, “at least give us grounds for some cautious optimism in the hope that we will be able to reach an agreement about the future, about the way the resolution process in Syria will go, about intra-Syrian dialogue, its principles, its participants.” He paused before adding, “And about a cease-fire.”

In recent weeks, diplomatic efforts toward a cease-fire in Syria have been hobbled by the regime’s renewed assault against Aleppo and its suburbs, a major stronghold of the rebels. Supported by the Russian bombing campaign, government forces have routed rebel groups dug in around the city, forcing tens of thousands of civilians to flee toward the Turkish border. TIME asked Medvedev when this offensive would stop — after the regime retakes control of Aleppo or, perhaps, not even then. Medvedev answered: “I think it all has to stop when peace arrives.”

The conditions he listed for such a peace indicate how far out of reach it remains. First, Syrian President Bashar Assad would have to sit down at the negotiating table with the rebel forces “who are capable of reaching an agreement,” Medvedev said. “That circle of people still has to be determined.” After that, the negotiating parties would have to agree on Syria’s political structure and the process of democratic reforms. They would also have to figure out Assad’s role in a future Syria, “because otherwise it would be strange,” Medvedev said. “At that moment,” he added, the fighting “should come to an end.”

But Assad clearly has no intention of finishing up just yet. His troops have come back from the brink of defeat since Russia began intervening on his behalf in late September, retaking territory from rebels forces that have been trying to topple him since 2011. Hours before the peace deal was announced, Assad made clear his intention to claw back control of all of Syria. “Regardless of whether we can do that or not, this is a goal we are seeking to achieve without any hesitation,” he told the French news agency Agence France-Presse.

Medvedev would not directly answer TIME’s question about whether Russia shares this goal with Assad. “He is not the one who will determine the extent of Russia’s military presence over there,” Medvedev said. The Prime Minister did, however, suggest that Moscow would resist any division of Syria between Assad and the opposition.

“We would like Syria to stay within its historic borders as a unified country,” he said, adding: “None of us need another Libya, which broke up into several pieces, nor do we need the kind of chaos in which various territories are under the control of field commanders or, to put it plainly, bandits, regardless what religious rhetoric they use as cover.”

In recent weeks, Western officials have begun to concede that Russia holds the cards in Syria, and that the success or failure of any peace deal will depend on Russia’s willingness to stop bombing rebel positions. “Frankly, it depends on what Russia wants,” British Foreign Minister Philip Hammond said at the Munich Security Conference on Saturday. “Unless Russia, over the next days, is going to stop or significantly scale back that bombing, the moderate armed opposition will not join in this process. They cannot be expected to join in this process.”

Even before the Russian bombing campaign began last fall, Western diplomats found it difficult to get rebel factions to negotiate with Assad, whom they accuse of widespread atrocities. Nearly half a million people have been killed during the four-year-old conflict, and more than 10 million people — or about half the population — have been driven from their homes. Many of them have sought sanctuary in Europe, where the massive flow of asylum seekers has destabilized the European Union. On Feb. 8, the U.N. Human Rights Council became the latest international watchdog to accuse Assad’s government of crimes against humanity, including the systematic torture and killing of detainees.

Asked to respond to the U.N. report, which cited “considerable documentary material” as proof of war crimes, Medvedev said it needs to be carefully studied and, “if it contains solid proof, it must receive an international legal assessment.” But such accusations would not, on their own, get between Russia and its allies in the Syrian regime. “Allies can differ in nature,” Medvedev said when asked about this.

Some alliances, such as the ones between prewar Syria and its former partners in France, Turkey and Saudi Arabia, can fall apart in no time when conflicts flare. “They helped Syria develop, and then reversed their positions overnight,” Medvedev said, while the bonds between Russia and Syria have proven more resilient. “So, the question now is not about who we call an ally, but about responsible behavior.”

Continuing on the subject of uncomfortable alliances, the Prime Minister noted that a variety of corrupt and violent despots have enjoyed U.S. support over the years. To make the point, he invoked the famous phrase—“He’s a son of a bitch, but he’s our son of a bitch”— that President Franklin Roosevelt is alleged to have said of the Nicaraguan dictator Anastasio Somoza in 1939.

The Russian alliance with Syria may not be much different, Medvedev suggested. “Of course, we do our best to honor our contractual obligations. If someone asks us for help, we try to assist. Do we use the famous formula of the United States, about our son of a bitch? Not always,” he said, chuckling. “That’s an American idea.”

Even so, Medvedev warned the U.S. and its Arab allies not to send ground troops into Syria to support any of the opposition forces. “Let’s remember what happened in Afghanistan,” he said, referring to the U.S. invasion of that country in 2001. “They still can’t leave. So, as soon as a conflict moves to the point of ground operations, it becomes endless. This is what’s dangerous. So don’t do it. Don’t even use it as a scare tactic.” So far, the Kremlin seems to have followed that advice, insisting that it has no plans to commit major ground forces to the war in Syria.

The 40-minute interview took place in a wood-paneled library of the Bayerischer Hof hotel, a few hours after Medvedev delivered a speech to the Munich Security Conference, an annual gathering of political and military leaders from around the world. During the speech, Medvedev declared that Russia and the West have, “in essence, tumbled into the times of a new Cold War.”

Such rhetoric seemed out of character for the Prime Minister, who is seen as the leader of the more liberal and pro-Western wing of the Russian state. His four-year tenure as Russia’s President and Commander in Chief, between 2008 and 2012, saw a dramatic warming of ties between the U.S. and Russia, as symbolized in the so-called “reset” of their relations in 2009. So the declaration about a “new Cold War” seemed all the more jarring coming from him, signaling how hawkish Russia’s political establishment has become since Vladimir Putin took a third term as President in 2012 and made Medvedev his second in command.

Still, during the interview on Saturday, the Prime Minister seemed eager to soften the remark he had made that morning about a new Cold War. “You asked me about the Cold War,” Medvedev said, without being asked about it. “Maybe this construction is wafting around in the air somewhere,” he said. “I never said that a new Cold War has started.” Rather, the actions of the NATO military alliance are “pushing us toward the emergence of a new Cold War. I said that, and I’m ready to confirm that.” In particular, Medvedev cited NATO’s plans to deter Russian aggression by stationing more troops in Eastern Europe. “If this isn’t preparing for another Cold War, what is it for then? For a hot war? Such is the reality,” he said.

More generally, the Prime Minister made clear that no pressure from the West — least of all the sanctions imposed against Russia for its military incursions in Ukraine—would force Moscow to change its policies. With those sanctions, he said, the West wanted to “punish” Russia. “The next question is whether they really punished us. Perhaps they gave us some uncomfortable moments. Bad? Not really. We are developing. We live and naturally, we’ll survive. Have the Russian authorities changed their political position? They have not.”

The cost of these sanctions, which have sought to cut Russia off from Western loans and financial markets, has come to tens of billions of dollars since they were first imposed in 2014, Medvedev says. But Russia would never ask the West to lift these measures – a point the Prime Minister made with a quote from the classic Russian novel The Master and Margarita, by Mikhail Bulgakov.

In the book, the devil pays a visit to Moscow in the guise of a magician named Woland and, at one point, he gives the protagonist, Margarita, the following advice: “Never ask anyone for anything! Never and no one, especially those who are stronger than you,” the devil says. “They will come themselves and give you everything!”

“And we, too, will never ask for these sanctions to be lifted,” Medvedev said. “They’ll come themselves and say: ‘Let’s finally put an end to this, because nobody is better off for it; everyone is only the worse off.’” 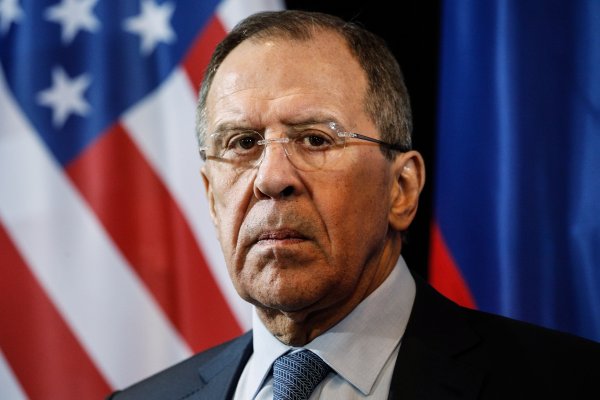 Why the Syrian Ceasefire Will Not Stop Russia's Bombing Campaign
Next Up: Editor's Pick