Antonin Scalia was not a great shaper of laws during his nearly 30 years on the United States Supreme Court. Nevertheless, the brilliant and polarizing conservative, who died on Saturday at 79, ranks among the most influential justices of modern times.

How can that be?

The great shapers of law are the justices who excel at building majorities in support of their opinions. This involves a lot of strategy, a fair amount of give-and-take, a knack for compromise. Scalia served for 20 years with one of the masters of this approach, retired Justice Sandra Day O’Connor, whose mark is deeply etched into the jurisprudence of abortion, affirmative action, criminal law, elections—and more.

Scalia was nothing like that. Fiercely committed to his “originalist” philosophy, in which the meaning of the Constitution never changes with changing times, Scalia was allergic to compromise. He stuck fast to even his most awkward positions, like his theory that the Constitution does not, strictly speaking, protect innocent people from being executed for crimes they did not commit.

He preferred writing a pure and knife-edged dissent, no matter how lonely, to the sort of pureed mumbo-jumbo that sometimes results from blending competing ideas into a single majority opinion. Scalia watched with unmasked scorn, for example, as Chief Justice John Roberts navigated in recent years for a middle path through the strong emotions and competing philosophies surrounding the Affordable Care Act—Obamacare. “Judicial jiggery-pokery,” he huffed of Roberts’s efforts.

And this was the source of his influence.

By planting his flag in one spot and refusing to budge, Scalia showed modern presidents and political parties that it is possible to pick a Supreme Court justice who shines brightly without shifting shape. Whether or not they ever said it in so many words, all presidents of the past two decades had Scalia in mind as they chose their own nominees for Supreme Court vacancies.

This became especially true after President George H. W. Bush watched his first appointee, the now-retired Justice David Souter, migrate from the moderate right of the Court to the leftward reaches. It was a journey painfully familiar to America’s conservatives, who had seen Republican nominees such as William J. Brennan, Harry Blackmun, and John Paul Stevens transformed into authors and spokesmen for some of the Court’s liberal landmarks.

Not Scalia. He did not budge an inch.

Nominated by President Ronald Reagan in 1986 and confirmed by a 98-0 vote of the Senate, Scalia was 50 years old when he assumed the seat vacated by the promotion of William Rehnquist to the position of Chief Justice. The son of an Italian immigrant, Scalia was gregarious, good-humored, and quotable both on and off the bench. He was devoted to his family—both his children and his growing army of law clerks—and to his friends, treating them with a warmth and gentleness utterly lacking in his rapier, unforgiving opinions.

He baffled political Washington by forming a deep friendship with Justice Ruth Bader Ginsburg; when this odd coupling was explained, it was usually chalked up to their shared fondness for fine food, a good joke, and a well-sung aria. But something deeper connected them: In a sense, Ginsburg was a liberal version of Scalia—not as combative in her writing, but every bit as stalwart in her philosophy. Though Scalia could never believe that his friend was right about the Constitution, he certainly could see and recognize in her a kindred spirit of genuine conviction.

Today, after 29 years of Scalia’s example, the warring interest groups that power the judicial confirmation process insist that their presidents pick judges from the Scalia mold, and that their senators work to block rising Scalias from the opposite party. They want to know what they are getting, and they want to be certain they will keep getting it for every day of a lifetime appointment.

The quest for unshakable, unmovable judges has altered the face of the federal courts. Gone are the days when presidents looked to the state courts, the legislatures, and the ranks of their fellow politicians for judicial candidates. Law professors and other legal purists are in favor now: they make their names by staking out ground and defending it, not by cutting deals. To one degree or another, that describes every Supreme Court justice since Souter, whether nominated by Democrats Bill Clinton and Barack Obama, or by the George Bushes, father and son.

What the country has gained in legal precision—and the U.S. has rarely, if ever, had a smarter or better-educated Supreme Court—it has lost in terms of the Court’s reputation for fair-mindedness. Scalia and his descendants on the right and the left could be counted on to vote so consistently on hot-button issues that many Americans have come to view the Supreme Court as just another partisan and polarized institution. According to Gallup pollsters, 50 percent of voters disapprove of the way the Court does its job, compared to 45 percent who approve. This is down from 61 to 28 percent approval for the court six years earlier, in 2009.

Still, Scalia can’t be blamed for the lessons that others have drawn from his powerful example. Even experts who disagree with many of his legal opinions appreciated the keen mind and sincere passion that he brought to his work.

For example, in one of Justice Anthony Kennedy’s landmark opinions in favor of equal rights for homosexuals, that determined law-shaper famously wrote: “At the heart of liberty is the right to define one’s own concept of existence, of meaning, of the universe, and of the mystery of human life.”

Even on Kennedy’s side of the issue, there were readers who cringed at this greeting card version of Constitutional law, and gave an inward cheer when Scalia lashed his colleague for composing this “sweet-mystery-of-life passage.”

In the long run, the law-shapers will have the greatest impact on how Americans live, and the ability to shape the law will always be a magnetic power drawing Supreme Court justices toward compromise. But there will be a place for principle, for clarity, and for fearlessness, too—and that place will forever bear the mark of Antonin Scalia. 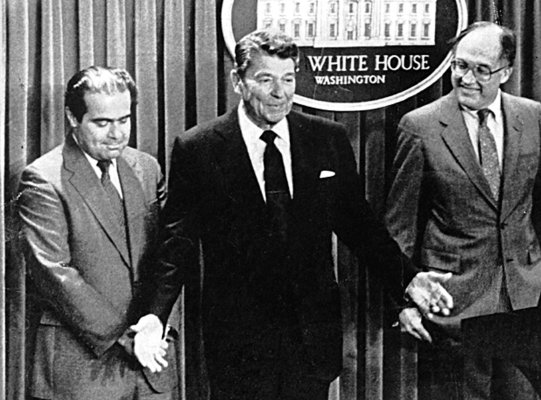 What Made Antonin Scalia Influential
Next Up: Editor's Pick