Senate Majority Leader Mitch McConnell and Senate Minority Leader Harry Reid sparred on Saturday, shortly after the death of Justice Antonin Scalia, over whether President Barack Obama or the nation’s next President should pick Scalia‘s replacement.

The Republican Senator said the U.S. Senate should not replace the U.S. Supreme Court Justice until the American people have chosen the next president, who could in turn nominate Scalia‘s successor. The U.S. Senate has a pivotal role in the Supreme Court justice nomination process and has the responsibility of confirming or rejecting whoever the president chooses as their Supreme Court nominee. McConnell statement reads:

In a blistering response, Senate Minority Leader Harry Reid of Nevada urged the swift replacement of Scalia. He said a delay would be “unprecedented” and “shameful.”

Republican Senators Marco Rubio and Ted Cruz, both candidates for the presidency, released statements that strongly suggest replacing Justice Scalia should be on Obama’s successor. Sen. Ted Cruz of Texas called Scalia an “American hero” in a tweet that said “we owe it to him, & the Nation, for the Senate to ensure that the next President names his replacement.”

“The next president must nominate a justice who will continue Justice Scalia’s unwavering belief in the founding principles that we hold dear,” Sen. Marco Rubio of Florida said in a statement.

Senate Judiciary Committee Chair Chuck Grassley released a statement also calling for the next president to pick Scalia’s successor. “The fact of the matter is that it’s been standard practice over the last 80 years to not confirm Supreme Court nominees during a presidential election year,” the statement reads. “Given the huge divide in this country, and the fact that this president, above all others, has made no bones about his goal to use the courts to circumvent Congress and push through his own agenda, it only makes sense that we defer to the American people who will elect a new president to select the next Supreme Court Justice.” 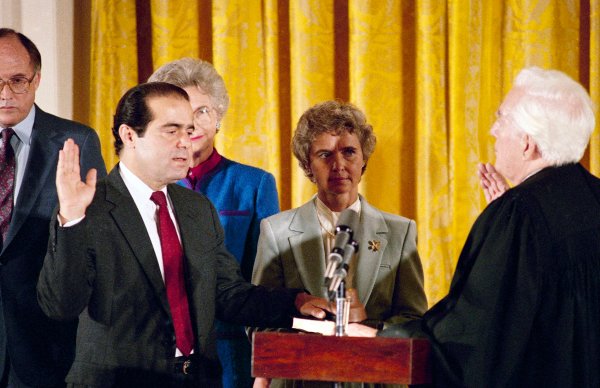 How the Next Supreme Court Justice Will Be Chosen
Next Up: Editor's Pick