Students organizing a sit-in against segregated housing at the University of Chicago in 1962.
Danny Lyon
By Sam Frizell

The photographer who captured civil rights efforts at the University of Chicago fifty years ago says that recently discovered evidence proves that a young man in a disputed 1962 photo is, in fact, Bernie Sanders.

The 1962 photo of a man leading a sit-in against segregated housing at the university, which Sanders’ campaign had been promoting to illustrate his involvement in the civil rights movement, came under scrutiny after TIME published an article last year with accounts by four alumni who doubted Sanders was the young man in the photo.

The contact sheets, reviewed by TIME, show pictures of the 21-year-old Sanders sitting on the floor wearing a rough, brown sweater and white shirt in what appears to be the same room as the disputed photo. The clothing Sanders is wearing on the floor in the recently discovered contact sheets looks to be the same as the clothing the young man is wearing in the photo in question.

Moreover, Lyon said that based on their order on the contact sheets, the newly discovered pictures of Sanders were taken immediately after the disputed photo.

“I’m deducing it by looking at the other photos on the contact sheets. Contact sheets are like evidence,” Lyon said in an interview. “There’s no question that that person standing there is Bernie Sanders.”

Lyon is a supporter of Sanders’ White House bid, but does not coordinate or work with the campaign.

Sanders is in a high-stakes race to reach out to black voters as the presidential primary moves to Nevada and South Carolina, where he has had trouble attracting support. Rep. John Lewis of Georgia, a leader of the 1960s civil rights movement and prominent endorser of Hillary Clinton has questioned Sanders’ involvement in desegregation. “I never saw him, I never met him,” Lewis said this week.

As part of its outreach to African-Americans, the Sanders’ campaign has used an impressive 1962 photograph that showed a young man speaking to a group of students during a sit-in in a web advertisement and on his website.

But last year, the photograph came under scrutiny. Four alumni who knew Sanders told TIME last year they believed the photo was not actually of Sanders, saying they believed the image actually showed a classmate of Sanders, Bruce Rappaport, who died in 2006. Shortly after TIME published the article about the disputed photograph, Rappaport’s ex-wife contacted TIME and said the photo was of her deceased former husband.

Sanders and Rappaport had similar features and gestures. The University of Chicago archives last year changed the caption on the disputed photo to indicate the photo was of Rappaport.

In the newly discovered contact sheets provided by Lyon, Sanders is sitting on the ground in what appears to be the same room where the disputed photo was taken, outside University of Chicago president George Beadle’s office. The contact sheet shows the photos were taken at a similar time, and show the seated Sanders wearing apparently identical clothing to the man in the disputed photo.

Students organizing a sit-in against segregated housing at the University of Chicago in 1962.
Danny Lyon

Because the order of photos in the contact sheet is chronological and can’t be changed, Lyon said it proves all the pictures are of the same man.

Lyon said that he was moved to publish the contact sheets after reading a Washington Post column published on the day of the Democratic debate that cited TIME’s article. The column, entitled “Stop sending around this photo of ‘Bernie Sanders,'” stated definitively the photo was not of Sanders.

Lyon found the contact sheets in storage in his house.

“That made me want to prove both that I took the photo, and that it was what I had done—which was a picture of Bernie Sanders,” Lyon said, who remembers photographing the sit-in but does not recall the moment he shot the photo.

The University of Chicago did not immediately respond to request for comment on the new development.

At least one of the alumni who originally questioned the photo is still friendly with Sanders. None of them questioned Sanders’ participation in the civil rights efforts on campus, confirming he had been a leading activist on campus. 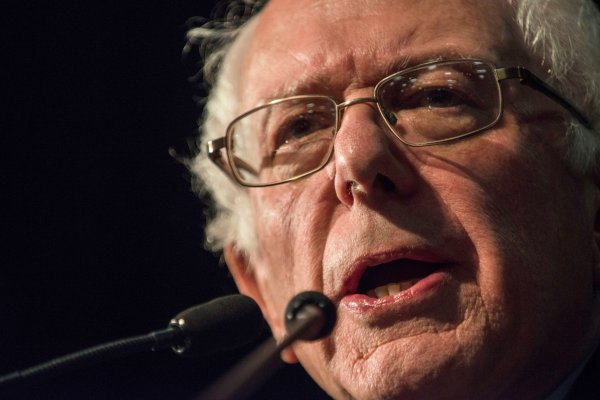 Bernie Sanders Spars Over Reparations at Race Forum
Next Up: Editor's Pick