Donald Trump continued to push the contentious issue of Ted Cruz’s presidential eligibility on Friday, threatening that he has legal standing to sue Cruz for not being a “natural born citizen.”

“If @TedCruz doesn’t clean up his act, stop cheating, & doing negative ads, I have standing to sue him for not being a natural born citizen,” Trump posted on Twitter.

Does Trump really have grounds to sue Cruz? According to some legal experts, the answer is yes, but they’re divided on how a court would handle such a claim. The real estate mogul has previously raised questions about whether Cruz’s Canadian birth disqualifies him from being considered a natural born citizen, warning that Democrats might file a lawsuit to dispute Cruz’s presidential eligibility. Some voters have already filed suits against Cruz, but experts tend to agree that a suit filed by a rival candidate, such as Trump, would hold more weight.

“For standing, you have to have injury, and his injury would be that he could quite possibly lose votes that would go to Cruz that might’ve gone to him,” said Mary Brigid McManamon, a constitutional law professor at Delaware Law School. She said a voter’s claim is less significant because their injury is the same as that of everyone in the state.

“Its plausibility gets greater the closer we get to the point where it’s clear that Cruz himself (and not Cruz together with Bush, Kasich, Rubio, and perhaps others) is the real obstacle to Trump’s nomination and thus a clear source of concrete injury to Trump’s prospects for the Republican presidential nomination,” Tribe said in an email.

Both McManamon and Tribe have argued that Cruz is not a natural born citizen based on a strict interpretation of the Constitution and is, therefore, not eligible to be president. McManamon said Trump should win a suit if he chooses to bring one, but she’s cautious about predicting what a court would do.

“It would be interesting to see if a court would actually take it,” she said. “They really don’t want to be in the middle of a political hot potato.”

Jonathan Adler, a constitutional law professor at Case Western Reserve University, is skeptical that a court would touch the issue at all. He said Trump would likely file a suit in one state to try to get Cruz excluded from that state’s ballot.

“Whether or not he would have standing would ultimately depend on that state’s rules,” Adler said. “There are some courts who might say this is really a question for voters to determine.”

Adler, who has argued that Cruz is a natural born citizen, said he doesn’t see any basis for a claim brought in federal court, but he thinks Trump could argue injury at the state level.

“Trump has at least a more plausible claim of injury because he can claim that he lost votes because of one erroneous decision on ballot eligibility,” Adler said, adding that he doesn’t expect a suit would get very far.

“I happen to think that the best arguments on the merits support Cruz’s eligibility, but even apart from that, I just don’t see courts intervening on this sort of thing,” Adler said, noting that Trump would be fighting an uphill battle. “I mean, he’s done crazier things, so we’ll see.” 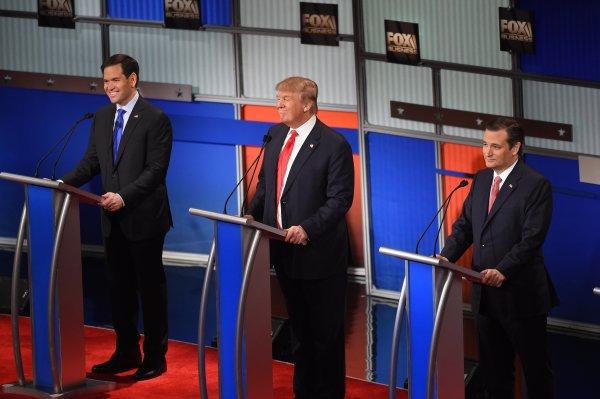