The executioner is a young boy. Carrying a knife in one hand, he leads his prisoner, a bearded man in an orange jumpsuit, into a clearing beneath two rows of trees. “These are the soldiers you spend money on,” he says in English. He forces the prisoner onto the ground, and then cuts his throat.

That scene unfolded in a video produced the propagandists of the Islamic State of Iraq and Greater Syria (ISIS). The victim was a jurist affiliated with the Levant Front, one of the rebel groups that is now fighting both ISIS and Russian-backed Syrian regime forces. Prior to his execution, the video assails the Levant Front for failing to adhere to Islamic law and for cultivating ties with the West.

The video, which surfaced on February underscores the rapidly shifting dynamics of the civil war in Syria. The Assad regime and its allies have made swift advances against rebel groups in recent weeks, imperiling the rebel-held city of Aleppo, but those advances to not portend an end to the war.

Rather, analysts and Syrian opposition figures say, the regime’s successes against the rebels will offer an opportunity for jihadi groups to assert themselves, filling the vacuum wherever more moderate groups are defeated.

Jihadi groups like ISIS and Jabhat al-Nusra, an affiliate of al-Qaeda, will continue to fight even if mainstream opponents of the regime are defeated or driven out of their strongholds. If the regime continues to advance, it could open a new phase of the conflict, in which ISIS and other extremist groups eclipse the revolutionary opposition to the Assad regime.

It is a scenario feared by opposition groups who warn that the regime aims to eliminate the rebels and position the government as a bulwark against extremism.

“It’s not as if the war is winding down or ending. It’s not as if the regime is reasserting control over all of Syria,” said Noah Bonsey, a senior Syria analyst with International Crisis Group, speaking via phone from Istanbul. “What’s crucial here is that the pragmatic, mainstream opposition actors on the ground are being eliminated in this process, and with them goes any opportunity of a negotiated political solution.”

The regime’s most dramatic advance came last week when pro-Assad forces, aided by Russian airstrikes, cut a key supply route into Aleppo. Tens of thousands have fled as residents fear the city could soon be surrounded. Recent victories by the regime and allied militias bring it one step closer to retaking Aleppo, which had been the largest city in pre-war Syria and was captured by rebels in 2012.

Parallel to recent victories in Aleppo, the regime has gained ground in southern Syria, retaking the town of Sheikh Miskin on January 26, cutting rebel supply lines in the area. The recapture of the town was also a symbolic victory in the south, a region where mainstream armed groups such as the Southern Front had held the upper hand over extremists.

Many of the mainstream and Islamist rebel groups fighting Assad are also opposed to ISIS, and losses on the rebel side could offer an opportunity for the jihadists to attempt to expand their territory. Faced with an overwhelming assault by pro-Assad forces, some rebel fighters could also join jihadist groups, seeing them as the hegemonic force among the groups arrayed against the regime.

“If anything it pushes people back against the wall. Some will say, maybe ISIS is an option, so I think ISIS is not uncomfortable with this, so they’ll be around for the foreseeable future,” said Paul Salem, vice president for policy and research at the Middle East Institute in Washington.

Regardless of the fate of the rebels, analysts say the Assad regime is not capable of winning the war outright. The regime faces a severe shortage of local troops, and as a result is now relying on Russian air power, as well as fighters from Iran, Iran, Iraq, Afghanistan, as well as the Lebanese group Hezbollah. Vast sections of the country remain beyond the regime’s reach and under the control of ISIS, rebels, and Kurdish groups.

“The regime and its backers can’t win this war militarily. They don’t have the manpower to defeat all of their armed opponents, establish control of the country and hold it. That’s not within the realm of possibility,” said Bonsey. “However, defeating the state-backed armed opposition may be realistic.” 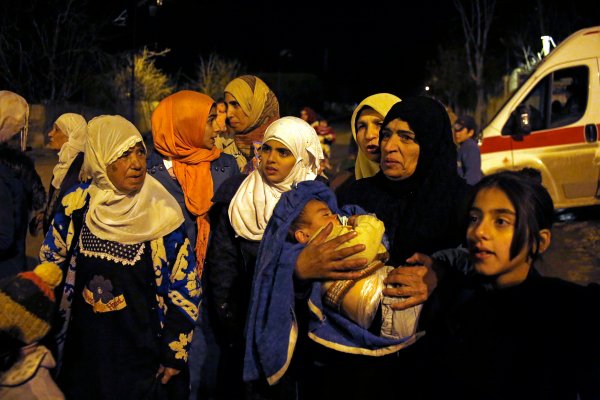 Besieged Syrian City on the Verge of Starvation
Next Up: Editor's Pick