Shimon Peres: 'Israel Will Be Stronger When She Achieves Peace'

When the 92-year-old former Israeli President, Prime Minister and Nobel Peace Prize winner Shimon Peres suffered a heart attack on Jan. 14, followed by another rush to the hospital for chest pains a week later, Israel nearly lost one of the most influential leaders in its 67-year history.

Peres’s impact on Israeli politics and society began even before the birth of the state itself. He has been at the forefront of every stage of Israeli history. Of a founding generation of the Jewish State that include his mentor, Israel’s first Prime Minister David Ben-Gurion, and his rival Yitzhak Rabin, only Peres is still alive. Until his retirement in 2014 as Israel’s President, Peres was the world’s oldest head of state, and he remains one of the most beloved and controversial figures in the country today.

As the Israeli government and public grows increasingly right-wing and increasingly skeptical of a peaceful resolution to the Palestinian conflict, Peres remains one of the last political leaders who still believes in a two-state solution. On the same day as Peres’s exclusive interview with TIME on Feb. 8, in which he reiterated his faith in the prospects of peace despite a five-month wave of Palestinian terror attacks, Peres’s successor and Israel’s current president Reuven Rivlin declared peace with the Palestinians “impossible.”

Read More: The Full Transcript of the Interview with Shimon Peres

Yet despite being the face of Israel’s dwindling peace bloc, for much of Peres’s life, he was a man of war. After his family moved from Poland to what was then British Mandate Palestine in 1934, Peres went onto lead several Zionist youth movements, and in 1947 joined the Hagana, the precursor to the modern-day Israel Defense Forces (IDF). Peres became one of Ben-Gurion’s closest aides, serving as the head of Israel’s navy during and after the 1948 War, and becoming director general of Israel’s Defense Ministry in 1953 at the age of 29. He went on to serve as minister of defense between 1959 and 1969, and during his time in office, created Israel’s officially secret nuclear program and established the country’s first West Bank settlements.

So how did a man with the resume of a hawk become known for his dovish views? To hear Peres tell it, he stayed the same—a pragmatist, who cares first and foremost about Israel’s national interest. And over the course of his career, he’s come to believe that peace with the Palestinians is in Israel’s interest. The number of settlements that were built during his left-wing Labor government, he says, were trivial— just 21 compared to the tens of thousands of new settlers that have grown since right-wing Likud leader Benjamin Netanyahu took power beginning in 2009. And if it weren’t for Israel’s nuclear program, Peres argues, the historic Oslo Accords he helped negotiate with the Palestinians wouldn’t have been possible.

Peres sits for a portrait at the Peres Center for Peace in Tel Aviv-Jaffa, Israel, Feb. 8, 2016.
Oded Balilty—AP for TIME

“Dimona [the location of Israel’s nuclear reactor] helped us to achieve Oslo,” Peres tells TIME. “Because many Arabs, out of suspicion, came to the conclusion that it’s very hard to destroy Israel because of it, because of their suspicion. Well, if the result is Dimona, I think I was right.”

This is a rare confession by Peres—Israel officially neither confirms nor denies the existence of a nuclear arsenal—and he even credits the nuclear program for leading to regional deterrence. He rejects the idea that it might have fueled a nuclear arms race in the Middle East, arguing that it’s not the weapon that matters, but who wields it—which is why Peres is so concerned about the possibility of an Iranian bomb. “If Switzerland would try today to have a nuclear bomb, I’m not sure people would be very concerned,” he said. “But when you have Ayatollahs who call for the destruction of Israel and even for the destruction of the United States of America – ‘the big Satan and the small Satan’—that is a very dangerous combination.”

But unlike Netanyahu—who fought the White House over nuclear negotiations with Iran—Peres believes the deal struck last year by President Obama is a good one for Israel. “I know many people objected to it, and like every agreement, there are probably some problems,” he says. “But we have to look at the opportunities that were created afterwards. And undoubtedly this agreement created opportunities.”

Oslo itself is a prime example of the contradictions built into Peres’s life and career, which in a sense reflect the very country he helped to build. Rabin and Peres were longtime political rivals, jockeying for power on the Israeli left for decades. Even in their stewardship of the Oslo Accords, they fought over how exactly to negotiate, with Peres favoring talks with then-Palestine Liberation Organization leader Yasser Arafat—who he and most Israelis considered a terrorist.

The Oslo Accords earned Peres a Nobel Peace Prize, alongside Arafat and Rabin. They also resulted in the murder of Rabin in 1995 by an Israeli extremist who opposed the compromise, which turned over some Israeli-occupied land to the Palestinians. Peres assumed the role of Prime Minister in the wake of Rabin’s death. Yet he was voted out of power a year later when Israelis, traumatized by a wave of Palestinian suicide bombings that followed the peace accord, voted for his right-wing opponent, Netanyahu, who had denounced Rabin in the run-up to Oslo.

Despite their differences, Peres would remain paired with Netanyahu. In 2007, Peres left the Knesset, Israel’s parliament, to serve as president of Israel. The Israeli presidency is a ceremonial role with no legislative power, and Peres was forced to sit back as Netanyahu, who became prime minister again in 2009, carried out policies he vehemently opposed. During that time he held his tongue—something he no longer has to do after retirement.

“I think that Netanyahu should have followed what he said he is for, namely the creation of a two-state solution,” Peres told TIME. “He says, ‘I am for two states.’ He’s already seven or eight years prime minister and nothing was done or moved.”

Peres stands for a portrait at the Peres Center for Peace in Tel Aviv-Jaffa, Israel, Feb. 8, 2016.
Oded Balilty—AP for TIME

As for Netanyahu’s frequent argument that he lacks a “partner for peace” on the Palestinian side, Peres told TIME, “Whoever you try to negotiate with is not a partner. You start from animosity, not from peace. The purpose of negotiation is to convert somebody who is not a partner to somebody who will be a partner.”

Peres not only criticized Netanyahu’s failure to bring Israel closer to peace, but also his success in moving Israel further away from its most crucial ally. “The right thing was to have the bipartisan support,” said Peres, referring to the notion that Israel has grown more aligned with the Republican party under Netanyahu. “Anything that endangers it is a mistake, because I believe that we enjoyed something so unique and promising, having the two parties support the State of Israel in a very difficult time.”

When Peres retired from politics in September 2014, it was to spend more time running the Peres Center for Peace, located in a predominantly Arab section of Jaffa. Befitting his unwavering optimism, Peres’s office faces the blue Mediterranean.

“In my lifetime I saw many things that people said they were unsolvable,” said Peres, referring to the two-state solution, which he believes must come about sooner or later. “I think it’s the only thing which is possible in order to bring an end to terror, violence and hatred.” For a man who spent much of his career engaged in the art of war, Peres believes that true security for his country can only come when the fighting ends. “Israel will be stronger when she achieves peace,” he says. “Two states can bring peace. The lack of two states can prevent peace. And nations without peace, people without peace, are going to live in a terrible tragedy.” 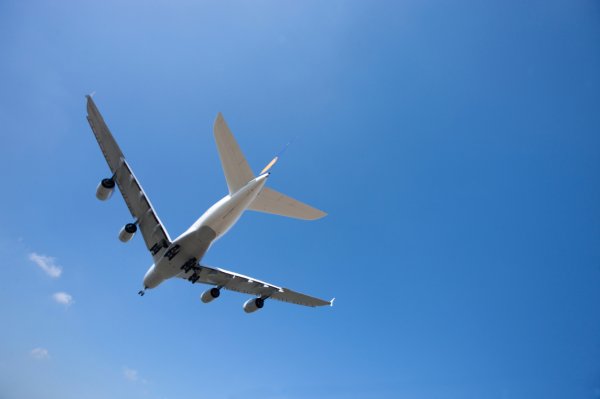 2015 Was an 'Extraordinarily Safe Year' for Flying
Next Up: Editor's Pick