The Lonely Journey of Migrants to Europe

It was the story of 2015, but the historic migration into Europe didn’t end when the year did. About 2,000 people a day crossed the Mediterranean into Greece last month–more than the number for all of January 2015. Despite an increasingly cool reception from Europeans, they keep migrating through the rough winter months. They put their trust in conniving smugglers and unreliable boats. Thousands have died so far, and more will still.

TIME contract photographer James Nachtwey, who traveled to the Greek island of Lesbos and the country’s border with Macedonia late last year, has documented the movement of those displaced by war and other disasters for more than three decades. But the sheer size and disruption of this latest wave eclipsed anything he had previously covered. “I’ve never seen this before,” he says.

Nachtwey’s pictures tell the story. The woman in tears after her arrival on European soil, the man standing between migrants and a row of police shields, the refugees shouting to be let through the border crossing. In each image, Nachtwey captures his subjects’ individuality amid the chaos. “The complexity,” he says, “is in their emotions.”

That focus on individual experience is the theme of his life’s work. As the migrant crisis has lingered, compassion for the Middle East’s refugees has given way to fear and loathing of an undifferentiated mass of invaders. But Nachtwey’s photos give back the only thing these refugees may have left: their stories. 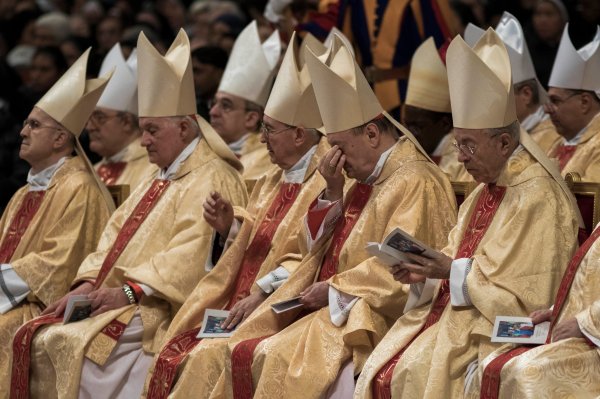 Vatican Says Bishops Don't Have to Report Child-Sex Abuse
Next Up: Editor's Pick