Fresh from a second-place finish in New Hampshire, Ohio Governor John Kasich knows he faces an uphill battle for success in South Carolina, a conservative electorate he has spent little time courting.

“They warned me when I was coming down here, ‘You’re going to South Carolina and they’re really conservative down there,’” Kasich said. “And I’m like, wait a minute. People are people. We all have the same concerns.”

The self-professed “prince of light and hope” — a title he now says was hyperbolic — is preparing for a turn of ugly in the notoriously trying Palmetto State, even as he casts his eye toward the general election. Equal parts self-help guru and policy wonk, Kasich’s optimistic message has always been an awkward sell in a party that has gravitated to the “darkness” of attack ads and xenophobia, as Kasich describes it. But he is billing his strong finish in the Granite State as a vindication that another type of politics may be having a moment. “I am not going to run for President by having a negative message,” Kasich said as he began his remarks to an overflow crowd of several hundred at a pizza joint outside Charleston.

But first he has to ramp up his organization and appeal in the state where he polls in the single digits. “You don’t know me, so I guess I’ve got to go back to the beginning,” Kasich said at the top of the town hall, acknowledging how far he has to go in the state. Yet there were some signs of movement, as passersby greeted him as he ate lunch at a Wendy’s and when he walked to and from his campaign bus. He said an event in Hilton Head Thursday morning drew just 50 RSVPs Tuesday; now there are over 1,000 pledged attendees.

Kasich knows he can’t win in South Carolina, but hopes to compete with his Establishment lane, Floridians Jeb Bush and Marco Rubio, enough to keep them from amalgamating their lane. Already the knives are out against him. Bush has criticized Kasich for his expansion of Medicaid under the Affordable Care Act and his support for military budgeting reforms. Kasich warned rivals he would not be passive in the face of criticism, saying his McKees Rocks, Pa., roots have taught him to be scrappy: “I’m not going to be a pincushion or a marshmallow,” he said. “I’m going to defend myself, that’s all.”

During his final events in New Hampshire, Kasich was frequently stopped by lifelong Democratic voters who said his message was resonating with them. Another such voter questioned him during his first appearance in South Carolina, an effect Kasich wrote off to the Democratic Party shifting leftward, particularly with the rise of Bernie Sanders. “I will have a chance to win those blue collar conservative Democrats,” Kasich said. “Their party has left them behind.”

Kasich elaborated on the theme in an interview with TIME, saying his appeal to centrists makes him more electable. “Everyone talks about the Republican Party moving right, that’s a joke compared to how far left the Democratic Party moved,” he said. “They’re spending their time trying to get their socialist credentials. It’s unbelievable.”

His answer betrayed his own frustration with elements of his party, who have enforced purity above all else. “Some people try to call me a liberal because I think we should offer opportunity to everybody, not just to some people, but to everybody,” he told the crowd. “And I don’t know how the Republican Party got so far off kilter.”

Asked about his support of Medicaid expansion, Kasich argued his record on budgets and taxes made him the most conservative in the race. “Who’s more conservative than I am?” he asked, before listing his achievements. “I think that’s the definition of conservatism. And if conservatism has switched from a philosophy of opportunity for all, then we better take a good look at what it means to be a conservative. And look, I’m helping to redefine it right now.”

Later he told TIME that it was others who were looking to change the GOP’s guiding philosophy. “I think they’re trying to redefine it,” before admiring of himself with a smile. “That’s a great line,” he said. 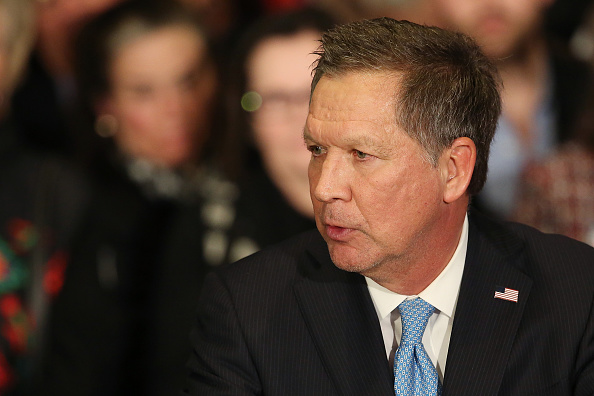 Kasich Stoic as He Heads South
Next Up: Editor's Pick