Besieged Syrian City of Madaya Again on the Verge of Starvation

In this Jan. 11, 2016, photo, a group of women and young children wait to leave the besieged town of Madaya, northwest of Damascus, Syria. Doctors Without Borders says dozens of people in Madaya have died of starvation since September.
AP
By Rebecca Collard / Beirut

When he last spoke to TIME a month ago, the schoolteacher was preparing to receive desperately needed food from aid organizations dispatched to the town of Madaya, long besieged by the forces of the Syrian regime. On Wednesday, he said he still has some food from the last aid delivery but is rationing it carefully. Just like the other 40,000 people in Madaya, he has no idea when food will come again. “I had grass today to save food,” Bourhan says.

The Jan. 11 supplies came to the city thanks to a deal brokered by the U.N. between the Syrian government and the opposition factions that saw aid delivered simultaneously to two government-controlled towns and Madaya, which is held by the rebels. The delivery contained rice, oil, beans and other basic supplies meant to last the besieged residents of Madaya for one month.

For many, it was too little and too late. Some people were so malnourished when the aid arrived, they died in the following weeks. The U.N. said 400 people needed immediate medical evacuation but was not able to take them out.

Now that one month is up. Some families have already run out of food and turned to local charities for extra food, residents of the besieged city say. No new deal appears to be on the horizon; the last agreement came after six months of negotiations, says Henrietta McMicking, a press officer with monitoring group the Syria Campaign, and only once images and video of emaciated children emerged from the town and international focus shifted to Madaya.

Today the escalating military situation and impending humanitarian crisis around the city of Aleppo is of greater concern to the global community. “There doesn’t seem to be the political will to go back in,” she says.

The terrible irony is that even as the people of Madaya starve, the supplies that could save their lives sit only a few miles away, according to Abeer Etefa, a spokesperson for the U.N. World Food Programme (WFP). “The food is in the warehouses,” she says. “It’s only a 15-minute drive to Madaya.”

Etefa says it’s not possible for WFP to simply send in aid without the agreement of the government and militant groups, and Damascus rarely grants such requests. The roads are lined with snipers and checkpoints, making unsanctioned humanitarian missions dangerous if not impossible.

The U.N. could be doing more, McMicking says, pointing out that under three subsequent Security Council resolutions, the international body is allowed to deliver aid to all parts of Syria. “They don’t need permission. They just need to give notice,” she says. “But there seems to be no will to push against the Syrian regime.” The U.N. has even been accused of allowing the Syrian government to censor its aid plan.

The U.N. did not respond directly the accusation that it allowed the Syrian government to censor the report, however, Ghalia Seifo, a spokesperson, stressed that the U.N. “provides humanitarian aid to all who need it, on the basis only of an objective assessment of need — in this and in all crises.”

Seifo said she did not know when aid would be delivered to Madaya. But until it is, Bourhan says he and his family and friends are on a “diet.” Scraps of information are as few and far between as scraps of food. “Did you hear anything about the aid?” he asks. 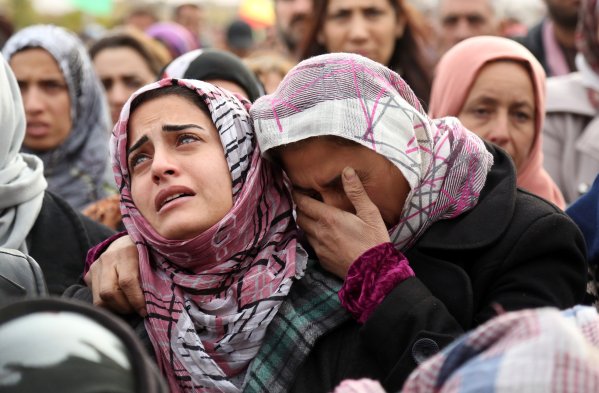