Kasich Remains Stoic as He Heads to South Carolina

Ohio Gov. John Kasich racked up a second-place win in New Hampshire with a calm and collected campaign in the shadow of the bombastic GOP frontrunner. That stoicism extended even to his reaction to the surprising win.

“I’m actually a little confused about, or uncertain about my emotions,” he said as he waited for his midnight plane to South Carolina late Tuesday. “I can’t put my finger on it. You’d think it’d be like jumping, hitting my head on the top of the ceiling here but I’m just as calm as I’ve been for a month.”

The mercurial candidate brought crowds to their feet playing rock and pop music at his town halls, and sought to inspire his audiences with emotional narratives on self- and community-improvement. As Donald Trump and Ted Cruz soared, he christened himself the “prince of light and hope,” and despite placing 19 points behind the bombastic front-runner, claimed he had vanquished the dragon.

“Tonight the light overcame the darkness,” he said, “Just maybe, we are turning the page on a dark part of American politics.”

Jettisoning staff from his overweight plane to accommodate a ballooning press contingent, Kasich reflected on his newfound success on the campaign trail. “It was like flipping a switch in a way, you know? You get very little attention and then you get a lot,” he said. “And I’ll tell you what I’m very happy about. I’m still very centered.”

Kasich’s trend-defying optimism helped him attract moderate and independent voters in the Granite State despite more than $10 million spent in negative ads against him. Kasich largely avoided personally going negative, though his super PAC, New Day for America, engaged in its share of mudslinging. With the scrutiny intensifying, Kasich was realistic about the need to go on the offensive down the line.

Read More: Why Republicans Are More Divided Than Ever After New Hampshire

“I know we can’t just go through this like falling off the turnip truck and saying that that everything is just going to be positive, because I’m going to have to respond to some of this stuff,” he said. “But I’m starting to really think we’re on to something. I’m starting to really think that the positive nature of a campaign could be very effective.”

Criticizing the negativity of the $65 million Bush effort, Kasich added, “they ought to get this thing figured out at some point—I mean they’re spending so much money I don’t know who’s advising them.”

Kasich responded to the Bush campaign’s messaging late Tuesday that his support for Base Realignment and Closure (BRAC) suggested he was responsible for weakening the military—a line of attack his rival is expected to trot out with greater intensity in the military-heavy Palmetto State.

“I think that’s kind of silly [to say] that I weakened the military,” Kasich said. “I don’t understand what they’re talking about.”

Some conservatives have mocked Kasich’s appeal for civility as “chicken soup for the soul,” he said. ”It’s better than razor blades to gargle with,” Kasich quipped.

As happy as he was with his positive message, Kasich said he was proud to have followed through on his predictions of how he’d perform.

“I’ll tell you what I feel good about—I told a lot of you how we’re going to do, so when I actually did it, that’s pretty cool,” he said.

Kasich’s message will face its toughest test yet in South Carolina, where he has spent little time and the state’s more conservative voters appear less welcoming. Like most campaigns, his is running on financial fumes, but has seen a major uptick in support since Tuesday’s finish.

“We’ve got to raise more money,” Kasich said. “We gotta try to keep doing this whole format as best we can. I think we keep doing what works for us and we’ll see. “ 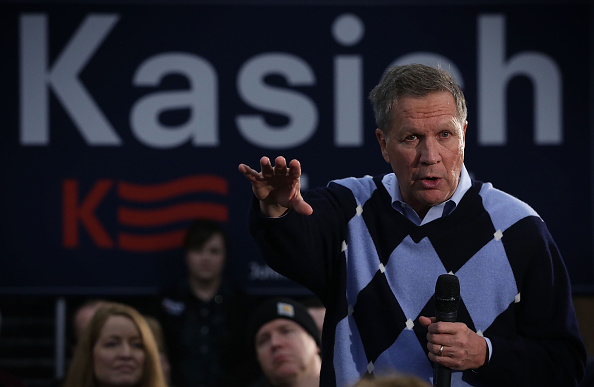