The Walking Dead Watch: 'No Way Out'

If you ask yourself why so many people still watch The Walking Dead after six long seasons of gore and goodbyes, “No Way Out” provides an almost perfect answer. The mid-season premiere was brutal, grim, disturbing—all the earmarked words in Marylin Manson’s copy of the Oxford American Writer’s Thesaurus. In other words, episode nine of season six was awesome.

The theme of this season so far has been the lengths to which Rick Grimes’ group will go to secure the utopic community of Alexandria. Gated, walled, bestowed with abundant renewable energy and picket fences on generous 1-acre lots, Alexandria is the safest safe haven the group has come across yet. But it also suffers from sclerotic political leadership that is dangerously out of touch with the full horror of the apocalypse. (Part of this is mere circumstance: the community’s location near a massive walker-trapping quarry insulated it from experiencing the bite-bite, chomp-chomp reality of the world outside.) The mid-season finale put this Shangri-La on the Potomac in extreme jeopardy thanks to a cavalcade of horrors—a swarm of undead let loose by a band of barbarians tearing at Alexandria’s prophylactic walls.

“No Way Out” begins with an ominous overture far from Alexandria, though. Daryl, Abraham and Sasha are stopped by road agents on motorcycles who want their stuff—guns, gas, Abraham’s vintage getup. “Your property now belongs to Negan,” the lead biker tells them, uttering the name of The Walking Dead comic’s arch-villain and antithesis to Rick. (We have yet to see him, but Negan will reportedly be played by Watchmen actor Jeffrey Dean Morgan.)

Lots of villains have tried to take the group’s stuff. What makes this instance different is the chilling combination of sangfroid and humor displayed by Negan’s lieutenant. His pep-speech for the head-strong Abraham: “If you have eat sh-t best not to nibble. Bite. Chew. Swallow. It goes quicker.” This is the most unhinged instance of bawdy villainy since Gary Oldman in True Romance. Or Gary Oldman in The Professional. Or Gary Oldman in The Fifth Element. In any case, this introduction to madness is a kind of foreshadowing of the brutality to come.

Daryl manages to extricate the caravan from the standoff by blowing up the bikers with a bazooka.

MORE: The Definitive Ranking of The Walking Dead‘s 20 Most Evil Villains

Back in Alexandria, things are not going well. Walkers have overrun the community, splitting residents into several cohorts each facing a different version of the same problem: to hide or fight. Most seem to want to shelter in place. Carol and Morgan are holed up together; Both are marked by the unforgettable loss of a child, she a Machiavelli as a result, he a Zen master. Denise, the cowardly-but-working-on-it town medic, is a hostage to the nameless and lawless leader of the Wolves, an Andrew W.K. lookalike with a come-hither “W” forehead tatt. Glenn is church-bound with Enid, a teenager with profound PTSD much like the children in Emily St. John Mandel’s 2014 novel Station Eleven.

Most unfortunate: Rick is leading Carl, Michonne, as well as Jessie and her skittering children through a mass of walkers. Festooned in guts-drenched, make-shift ponchos for camouflage, they have to walk slowly, silently through halls of death, reminiscent of a Dore illustration of Dante in Hell. (It’s a metaphor for the show’s meta-arc, like Aeneas carrying his family on a perilous journey toward an uncertain home.) Jessie’s son Sam, recalling a prophetic speech Carol gave him about the gnashing of the monsters, begins to whimper and give himself away. His comrades are forced to watch mute as walkers begin devouring him before turning on Jessie who won’t let go of her son’s hand, nor Carl’s.

This horrifying scene, one of the most haunting in the show’s six seasons, reaches crescendo when Rick moves to cut Jessie’s hand from Carl’s with a hatchet. Jessie’s other son points a gun at Rick to warn him off. Michonne stabs him, but not before the gun goes off. Then we get a glimpse of Carl to be, a hole blown through his right eye. The television adaptation has too long pivoted on Rick’s moral dilemmas, his rocky path from rule-bound lawman to tribal chieftain. The pathos of the books, though, is Carl who is a kind of embodied disfigurement of all survivors’ inner trauma. He looks the way everyone feels when the world goes to Hell. (In the comics, he’s shot much earlier.) Finally, the show is catching up with the books in this regard. And that means the show runners are setting the next stage, a crueler and much darker one.

The rest of the episode is a process of self-actualization for the Alexandrians. Slowly, all the disparate groups decide to fight for their community. Gabriel, the cowardly priest, says to his cohorts, “We’ve been praying together, praying God will save our town. Our prayers are answered. God will save Alexandria because God has given us the courage to save it ourselves.” Elsewhere Eugene, another coward, puts it more succinctly and secularly: “No one gets to clock out today. And, Hell, this is a story people are going to tell.” This all swells into unanimous decisions to fight, rather than cower. And the community comes together in a montage of violence.

In the last minutes of the episode, a grey dawn rises over body-littered streets. The survivors, bound in the crucible of war, are gathered in the makeshift hospital waiting for Carl to wake up. Rick whispers to his son, “I was wrong. I thought after living behind these walls for so long, I thought that maybe they couldn’t learn. But today I saw what they could do, what we could do if we work together.” He vows to rebuild and expand and grow the flock: “It’s all possible. I see that now.” Rick then offers testimony to his hope: “I want to show you the new world, Carl. I want to make it a reality for you.”

And in the final shot, Carl takes his father’s hand.

Zombie Kill Count
9 samurai sword decapitations by Michonne; 33 blades to the skull by Rick; 105 miscellaneous stabs, jabs, and chops by various community members; 8 drawn into a lake of fire by Daryl.
Estimated total: 155 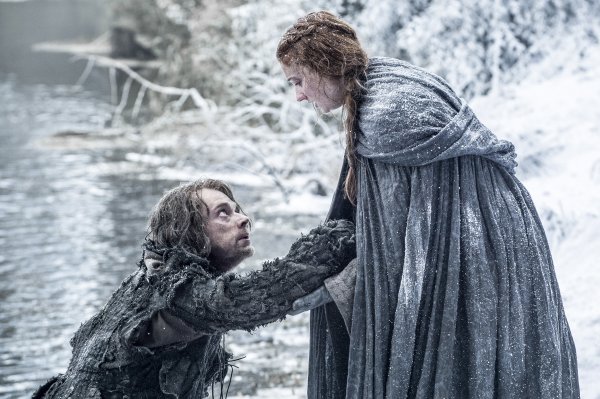 We See Dead People in the New Game of Thrones Teaser
Next Up: Editor's Pick