How Much Does America's Huge National Debt Actually Matter?

After briefly surging to the forefront of the national debate, concerns about U.S. debt appear to have gradually dissipated in the body politic. A recent Pew survey found just slightly above half of Americans consider the budget deficit a top priority, down from 72% in 2013, and the issue has fallen in that time from the public’s number two priority (behind only the economy) to number nine.

But while deficit hawks may no longer hold as much sway, their concerns are still worth investigating, especially as election season approaches. The essential question: How much does national debt matter? For a country like the U.S. with a good payment history, (relatively) strong economy and control over its own currency, the answer at least for the moment, is “not too much.” To understand why, looking at the country’s total debt, which has nearly doubled following the financial crisis, matters less than how much it costs to finance our debt. That is, the most important number is the minimum payment on the credit card bill, rather the the total amount we owe.

Luckily for the U.S., that minimum payment has actually decreased even as total debt has risen. The more people want to buy U.S. debt (Treasury bonds), the lower interest payments the government needs to offer in order to incentivize those purchases, and American bonds are in high demand because they’re seen as a relatively safe investment in a troubled economic climate. As a result, the United States is forking over less in debt interest payments (as a percentage of GDP) now than it has since the late 1970s—even though the country owes significantly more.

Ok great, so we can borrow even more? Not exactly. While our debt load right now isn’t necessarily worth getting angsty about, thanks in large part to cheap cheap financing, at some point you really can have too much of a bad thing.

MORE: Why the World’s Debt Epidemic May Lead to a New Economic Crisis

Where exactly that point is continues to be a matter of dispute. There’s an ongoing controversy over whether a particular high debt watermark among advanced economies—such as a 90%-debt-to-GDP ratio—is broadly correlated with slower growth, or whether such thresholds are effectively arbitrary or too general to be of significance.

That debate has become heated at times, particularly because debt is such a partisan issue. But there may be more common ground than has generally been portrayed. Kenneth Rogoff, a Harvard professor who popularized the 90% hypothesis, says his point is simply that such a threshold should be very loosely considered a warning sign that invites further scrutiny of a nation’s economic fundamentals, such as growth potential, demographics, interest rates and fiscal policy. Robert Pollin, co-director of the Political Economy Research Institute at the University of Mass. Amherst and one of Rogoff’s primary critics, says there’s no basis to the 90% number and we should only be looking at those same economic fundamentals. There’s a real disagreement there, and one that has been heavily played up in the press, but it’s not exactly Montagues and Capulets.

Moody’s Analytics provides a sort of middle ground by creating a per-country debt threshold using a concept concept called “fiscal space.” In this framework, each country is assigned a debt-to-GDP limit—based on its economic growth forecast, interest rates, and other factors—beyond which point the nation “will default unless policymakers take unprecedented steps.”

This has the benefit of avoiding a one-size-fits-all rule and gives a nuanced picture of debt load as a matter of risk management. Maintain at least 124 points of fiscal space and Moody’s considers your country in the safe zone. Fall below that and you’re in the “caution” area, then “significant risk,” and so on. It’s also effective at showing how debt realistically impacts advanced countries—not necessarily through outright default, but rather via unpleasant emergency measures like higher taxes and dramatically lower spending.

MORE: This One Chart Explains Why Twitter Is in Trouble

The U.S. ranks somewhere in the middle of the fiscal space picture at 165, with 41 debt-to-GDP points to spare before we enter the caution zone. That means we have a decent amount of spending room before Moody’s ratings start to sound dire. For comparison, Norway leads the fiscal space list with a score of 246, the U.K. comes in a 132, slightly outside the caution area, and Japan is right in the red with a last-place score of 0.

However, Mark Zandi, chief economist at Moody’s Analytics, emphasizes that the fiscal space score shouldn’t be considered without broader context. For example, he says even increasing debt within safe levels can edge up interest rates over time, raising the cost of debt, or leaving less room for maneuver should another financial crisis strike. On the other hand, in the current economic environment of low interest rates, low inflation, and relatively low growth, more spending on items like infrastructure or education might actually be a good idea by increasing productivity and stimulating the economy. A report last year from the International Monetary Fund suggests that countries in the fiscal space safe zone might be better served living with their debts and trying to outgrow them through long-term economic expansion instead of trying to suffer the pain (and potential economic damage) of cutting productive spending or raising taxes.

But while the U.S. is far from trouble at the moment, it will have to clean up its fiscal house at some point. The Congressional Budget Office projects public debt in 2026 will jump ten points to 86% of GDP, and will hit a record 155% of GDP in three decades. Interest on debt, that minimum credit card payment, is projected to eclipse military spending by 2021, putting the squeeze on other fiscal priorities. If spending continues on its projected course and nothing is changed, debt interest payments will become a larger government expense than even Social Security by about 2060.

The CBO says we can we can keep debt-to-GDP levels where they are now by either cutting spending or raising taxes by 1.1% of GDP if we start now, or 1.9% if we start in ten years (returning to historically normal levels will take more severe measures). That’s not a huge burden, but it will get more painful the longer we wait.

“At this point what we’re doing is fine, we shouldn’t necessarily be focussed on the fiscal situation,” Zandi says. “But you look into the next decade, and then three decades from now, things are going to break.” 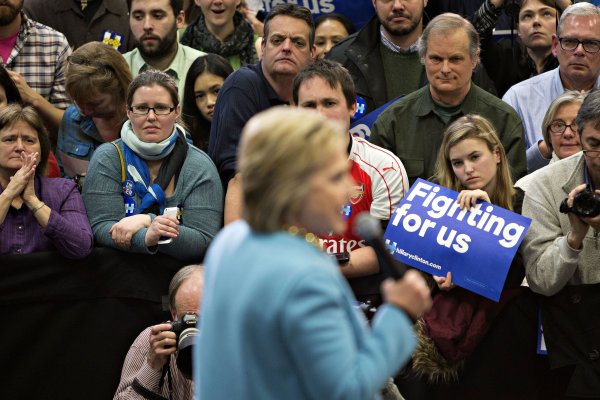 Gloria Steinem's Got Feminism All Wrong
Next Up: Editor's Pick