Christie, Fiorina Might Not Make Next Debate After New Hampshire Results

Chris Christie and Carly Fiorina have something more to lose in Tuesday’s New Hampshire primary: their slot in the next GOP debate.

According to criteria that CBS News announced Tuesday, candidates eligible for inclusion in Saturday’s South Carolina debate will need to have either been in the top three in the Iowa Republican caucuses, place among the top five candidates in an average of recent national and South Carolina Republican polls or finish in the top five in the New Hampshire Republican primary. Both Fiorina and Christie are unlikely to meet the first two criteria.

Exclusion from the debate could hurt the New Jersey governor’s comeback and serve as a death knell for Fiorina, whose debate performances previously propelled her campaign. But if they can eke out a top-five finish in New Hampshire tonight, they’ll be guaranteed a slot.

Fiorina, who was excluded from the last GOP debate in New Hampshire, fought back against the criteria used to qualify candidates, arguing that she’d earned a spot based on her previous debate performances and poll numbers.

Based on their performances in Iowa, Ted Cruz, Donald Trump and Marco Rubio have already qualified for the South Carolina debate. It’s not yet possible to determine who else made the cut because it’s not clear which polls CBS will use to calculate average ranking.

For the remaining presidential hopefuls, the New Hampshire primary will prove pivotal to inclusion in the debate.

An RCP average of New Hampshire polls shows Trump, Rubio, John Kasich, Cruz and Bush to be leading ahead of the primary. 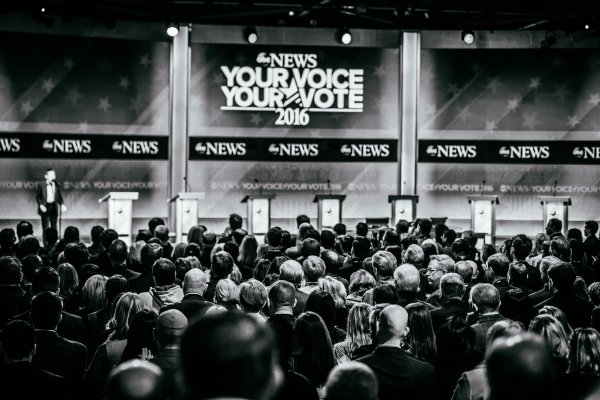 Watch the Republican Debate in Under Five Minutes
Next Up: Editor's Pick