Chris Christie knows how to work a room. The New Jersey Governor was met with cheers and raised glasses of beer when he entered T-Bones Great American Eatery at lunchtime in Derry, New Hampshire, on Tuesday.

“Go Chris!” someone yelled. “You got it,” he responded with a point.

“Are you going to come hug the bartender?” Angela Normyle called out from her post. “I’m coming behind the bar and hugging the bartender, alright?” Christie called back from the middle of the media scrum.

Christie spent about 20 minutes circling the large bar in the center of the room, alternating between talking to voters and the media.

With journalists and voters alike, Christie was quick to point to his strong performance against Florida Sen. Marco Rubio in Saturday night’s debate as evidence of his leadership.

“I’m going to be the guy to take out Hillary, you saw that Saturday night,” he said to one voter.

“I think Senator Rubio proved who he is and I proved who I am,” he said to the press. And later, when asked if he thought it would give him a bump in the primary: “We’ll see if I gained anything tonight.”

Christie is at 5.8% in New Hampshire according to a Real Clear Politics poll average, but he assured voters at his campaign headquarters Tuesday morning that he “can’t imagine a scenario tonight under which I wouldn’t be on the plane to South Carolina tomorrow morning.”

Read More: Why the Christie Show Is Second Only to Trump

At each table or barstool in T-Bones, Christie asked the patron if he or she had any questions for him as he snapped pictures and asked about their food.

“[He] takes his time with most people,” Andrew Groleau, 21, said of Christie. “It’s a good thing to do. Most people don’t do that.” Groleau said he’d already cast his vote for Christie this morning.

When Christie eventually made good on his promise to Normyle and made it behind the bar, he gave her a big hug. “Are they tipping you alright?” he joked. “Do I need to speak to any of them?”

Normyle, 34, said she was excited to meet Christie because of the “celebrity thing” but is still torn about who to vote for tonight. She’s deciding between Christie, Donald Trump and Rubio.

“This might have swayed it though,” she said. “You never know.” 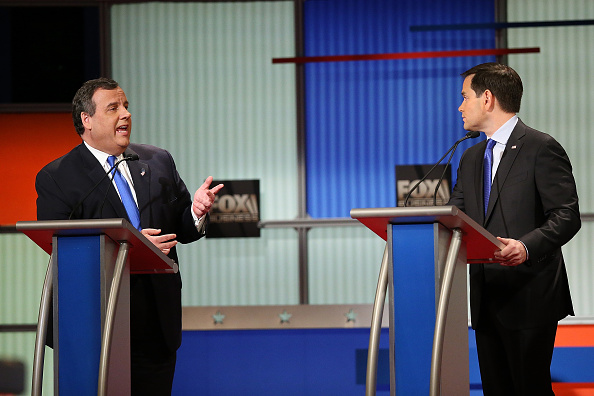