In an effort to level the playing field with Vermont Senator Bernie Sanders on Wall Street regulation, former Secretary of State Hillary Clinton argued Monday that he accepted money indirectly from financial institutions.

Speaking at a community college in Manchester, N.H., Clinton noted that Sanders received donations from the Democratic Party’s main Senate fundraising arm, which had in turn gotten money from Wall Street.

In a twist on the usual political arguments over donations, she didn’t say the money had influenced him, though.

“Senator Sanders took about $200,000 from Wall Street firms,” Clinton said, speaking to a crowd at the community college. “Not directly but through the Democratic Senate Campaign Committee. There is nothing wrong with that. It didn’t change his view. Well, it didn’t change my view or my vote, either.”

Sanders received funding $37,300 directly from the DSCC to help win his 2006 campaign for Senate, and the party spent $60,000 on ads for Sanders and contributed $100,000 to the Vermont Democratic Party, according to a recent CNN report. Some of the DSCC’s top contributors that year included Goldman Sachs, Citigroup and other major banks. There is no evidence that Sanders sought donations directly from Wall Street institutions for his 2006 campaign.

Sanders’ campaign manager shot back later on Monday afternoon. “Bernie Sanders, who has never accepted corporate PAC money in his life, is now accused by Secretary Clinton of taking ‘about $200,000 from Wall Street firms.’ How do they reach that false and absurd conclusion?” Jeff Weaver said. “They assume that every nickel Bernie Sanders received from the Democratic Senatorial Campaign Committee for his Senate campaign came from Wall Street.”

Clinton’s allies have attacked Sanders by saying he is not as ideologically pure as his campaign has claimed. By pointing to Sanders’ campaign finances via Wall Street, Clinton is suggesting his record is inconsistent with his fiery speeches.

Clinton told her audience that she has a tougher plan than Sanders to regulate Wall Street. “I haven’t just talked,” she said. “I haven’t just given speeches. I have introduced legislation. I’ve called them out. I’ve gone up to Wall Street. I said they’re going to wreck the economy over the mortgage markets.”

Sanders has repeatedly suggested that Clinton cannot be trusted to regulate Wall Street because of campaign contributions she has received from major financial institutions. Clinton’s campaign and her associated super PACs have received $21.4 million from donors at banks, hedge funds and financial-services firms through December, according to a Washington Post analysis.

On Monday, Clinton also brushed off claims that she has been influenced by Wall Street, saying that President Obama received money too. “And like President Obama, I have donations. There’s no doubt about that,” Clinton bristled. “But ask yourself: President Obama had a lot of donations. Did that stop him from signing Dodd-Frank, the toughest regulation against the financial sector?”

Sanders has called for legislation to reintroduce Glass-Steagall and break up investment and commercial banking, a call Clinton has resisted. Clinton has touted praise from economists that call her plan on Wall Street the toughest in the field.

Clinton said she is facing the toughest opposition from Wall Street because they are most afraid of a Clinton presidency.

“I have been speaking out against and working to rein in powerful forces for many years. I have the scars to prove that,” Clinton said. “They have spent a lot of money against me. I just want people to think about this: If Wall Street were so interested in supporting Democrats like the President and like me for their own reasons, whey are they spending $6 million trying to defeat me in this election?”

A spokesman for Sanders did not immediately respond to a request for comment. 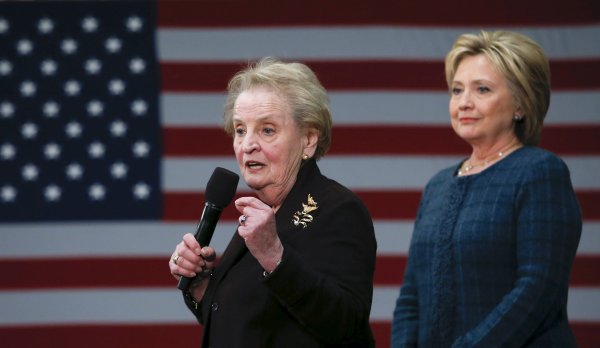