Democratic presidential candidate Hillary Clinton during a campaign rally at the Derry Boys and Girls Club in Derry, N.H., on Feb. 3, 2016.
Adrees Latif—Reuters
Ideas
By Laura Bates
Bates is the founder of The Everyday Sexism Project and the author of Everyday Sexism

Back in January, Republican Presidential candidate Ted Cruz was caught on camera suggesting that voters might spank Hillary Clinton in the same way he would spank his 5-year-old daughter for lying. Accusing Clinton of lying about the Benghazi attack, Cruz said: “I’ll tell you in my house, if my daughter Catherine, the 5-year old, says something that she knows to be false, she gets a spanking. Well in America the voters have a way of administering a spanking.” In the video clip, the audience, almost all male, can be seen laughing appreciatively.

Now New Jersey Governor Chris Christie has apparently doubled down on the metaphor, according to journalist Matt Katz, who tweeted Christie saying: “I’ll beat her rear end on that stage and afterward she’ll be relieved that I didn’t serve her with a subpoena.”

As several women have pointed out, it’s difficult to believe that this is something that actually needs saying, in 2016, but using this metaphor is sexist and demeaning. It hardly commends anybody hoping to convince the 53% of American voters who are female (not to mention those in the 47% who respect and care about women) that they are presidential material.

What makes matters worse is that this is just the latest in an endless slew of misogynistic attacks on Clinton, who is regularly bombarded with abuse that entirely fails to critique her policies in favor of prejudiced personal attacks.

A quick history of such abuse would include the ridiculing of Clinton’s laugh, famously dubbed the “Clinton cackle”—a term that (deliberately or not) carries an implicit association with that other great misogynistic slur: witch. Then there’s the endless speculation about her hairstyle and fashion sense and the accusations that she is too feminine or not feminine enough. Not to mention the international consternation about whether Clinton should be considered too frumpy or too sexy, with the exposure of about a centimeter of visible cleavage almost too much for some in the media to bear.

More recently, of course, Clinton has been experiencing the joyful combination of both sexist and ageist criticism, kicked off by Rush Limbaugh all the way back in 2007 when he asked: “Will this country want to actually watch a woman get older before their eyes on a daily basis?”

The suggestions that an older woman couldn’t possibly be trusted in the White House hit their peak after the announcement of Chelsea Clinton’s pregnancy in 2014, which gave rise to endless deliberation and columns about “President Grandma.” How could Hillary possibly combine grandmotherly duties with presidential responsibility? How could all her pesky female hormones be trusted around the nuclear button? Strangely, people don’t seem to be freaking out in the same way about grandfather and presidential candidate Jeb Bush.

Even as Clinton’s status as grandmother was being used as evidence of her unsuitability to run for office, she was simultaneously attacked for cynically using the situation to her advantage. Accusing Clinton of talking too much about her family, one strategist said: “I don’t need her to drown me in estrogen every time she opens her mouth.”

Ironically, the references to spanking have swung the dial back the other way, reverting to a sexist infantilization of Clinton, both implicitly and (in the comparison to Cruz’s 5-year old daughter) explicitly. The attempt to cast powerful, confident women as naughty little girls is nothing new, but it smacks of desperation. In December, Donald Trump’s campaign attacked Clinton supporters for talking about a “war on women,” with a spokeswoman saying: “They want to burn their bras and complain about equal pay and being treated as men, and the second they get criticized for anything they start acting like 9-year-old little girls.”

The impact of sexist attacks on women in politics shouldn’t be underestimated. They have a trickle-down effect, influencing voters and strengthening existing prejudice amongst the electorate, in the same way that coded language used by politicians both creates and reinforces sexist and racist stereotypes.

One high school senior who wrote in to the Everyday Sexism Project, of which I’m the founder, reported hearing students in her English class describe Clinton as “kinda a b-tch.” Another young women described hearing her parents joking about Clinton’s “frigidity.” When young people grow up hearing these kinds of insults and slurs used against female politicians, it doesn’t just risk harming their confidence in them as potential leaders; it also sends a clear message to girls that politics isn’t for them. It suggests that the political arena is a male sphere, and that women who dare to venture in are fair game for arbitrary lambasting on the basis of their looks, weight, clothes, relationships, sexuality and pretty much any other personal qualities that are completely unrelated to their political prowess. Putting off half the talent can only reduce the overall quality of the field. Sexism in politics isn’t just bad for politicians; it’s bad for us all. 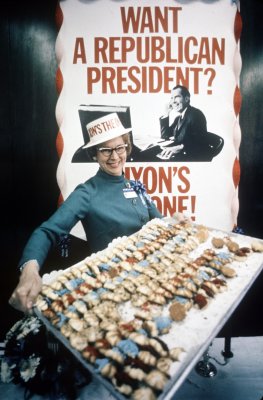 The Colorful New Hampshire Primary That Gives This Year a Run for Its Money
Next Up: Editor's Pick