How Bush Finally Landed a Punch on Trump

After failing for months to land a punch against Donald Trump, former Florida governor Jeb Bush appears at last to have discovered the real estate mogul’s kryptonite: a weedy, constitutional power called eminent domain, which allows for the seizure of private property for public use.

At the Republican debate Saturday night, Bush accused Trump of attempting, albeit unsuccessfully, to use the power of eminent domain to seize an elderly woman’s home in Atlantic City to expand a casino parking lot.

At first, Trump rolled his eyes at the accusation. “Jeb wants to be a tough guy,” he said, at least three times, before Bush dropped a solid retort.

“How tough it is to take away property from an elderly woman?” he asked. The crowd roared, cheering Bush and booing Trump, in one of the tensest moments of the two-and-a-half-hour debate.

The battle over eminent domain has continued ever since, in the days and hours before the New Hampshire primary kicks off Tuesday. On the campaign trail, Jeb has continued to hammer Trump for stealing from old ladies, while Trump has pivoted slightly, accusing Bush of being both confused about what eminent domain is and a hypocrite.

So where does all this mud-slinging leave us?

The short answer is that the issue of eminent domain is tricky terrain for Republicans.

On the one hand, many conservatives tend to be hard-line on private-property rights. From Adam Smith to Ayn Rand, a citizen’s right to private property is considered almost sacred.

But on the other hand, many conservatives tend to be enthusiastic about private development projects — from luxury condominiums and strip malls to new football stadiums. If liberals generally shudder at the idea of paving over a poor neighborhood to build a big-box store, state and local Republicans can generally be counted on to offer their support. So how do Republican lawmakers square that circle?

It all comes down to when it’s O.K. to force someone to give up their private property.

The Fifth Amendment of the U.S. Constitution leaves some ambiguity. It says that private property shall not “be taken for public use, without just compensation.” So what constitutes “public use”?

The most clear-cut examples are government facilities and government-run infrastructure, like post offices, schools, police stations, highways and sewage systems.

But then it gets into a slightly more gray area.

Should private railroads, wind farms, telephone companies or cable providers be able to use the power of eminent domain to expand their networks to serve more of the public and therefore access more paying customers? While most legal experts generally say yes, individual cases are often contentious. For example, in the past few years, property owners in Nebraska sued the Canadian oil company that was trying to build the controversial Keystone XL pipeline from Canada to the Gulf Coast, on the grounds that the company was abusing the power of eminent domain to seize their land. (A Nebraska court eventually sided with the oil company.)

In the past 60 years, the definition of “public use” has also begun to expand to include, for example, municipal development projects that seize “blighted” areas, and hand them over to private developers to build new housing projects, strips malls or commercial centers. The idea, which remains controversial, is that these new private developments or centers serve the public interest.

Which brings us back to the battle between Trump and Bush.

Bush accuses Trump of abusing eminent domain in his attempt in the 1990s to expand his Atlantic City casino parking lot. On this, Bush is almost definitely correct: most legal scholars, including the New Jersey superior court judge who eventually ruled on the case, argue that a private casino parking lot doesn’t even remotely fall under the category of “public use.”

Trump, meanwhile, accuses the Bush family — namely, former President George W. — of abusing eminent domain in building the Rangers’ stadium in Arlington, Texas. But that, again, gets back to that gray area of how we define “public use.”

Private-property advocacy organizations, like the Institute for Justice, say it’s definitely not O.K. to force people out of their homes to build a stadium of any kind — even if the majority of the city or state vote in favor of it. They point at plans to build a new, 25,000-seat major-league soccer stadium in Miami, the beating heart of Jeb Bush’s state, that is expected to require the destruction of a day care, an apartment building and several houses.

On Fox News on Monday morning, Bush simply avoided the subject of stadiums entirely. Instead, he bragged that the Florida legislature passed an amendment strengthening private-property rights against eminent-domain claims. “Donald Trump could not do what he tried to do in Atlantic City in Florida, and that’s the right thing,” Bush said.

“Eminent domain should be used for infrastructure, for public right of way — for things it has always been used for, that’s more than appropriate, but not to take away a home from an elderly woman so you can build a stinking parking lot for limos for your casino,” Bush added. “That’s just, you know, not the appropriate use of police powers of the government.”

So far, Trump has proved to be the Teflon candidate, emerging unscathed from a hail of attacks on his less-than-conservative record, “New York values” and his mercurial temperament. The latest polls in New Hampshire show him drawing nearly a third of Republican support in the state, well ahead of Marco Rubio at 15%, Ted Cruz at 13%, John Kasich at 11% and Bush at 10%. There’s perhaps no reason to believe that Bush’s eminent-domain offensive will have any effect on Trump’s enduring popularity.

But Saturday night was also the first time a Republican crowd at a Republican debate booed Trump for an extended period of time. With the New Hampshire primary less than 24 hours away, the suggestion that Trump does not have respect for private property could still make a dent. 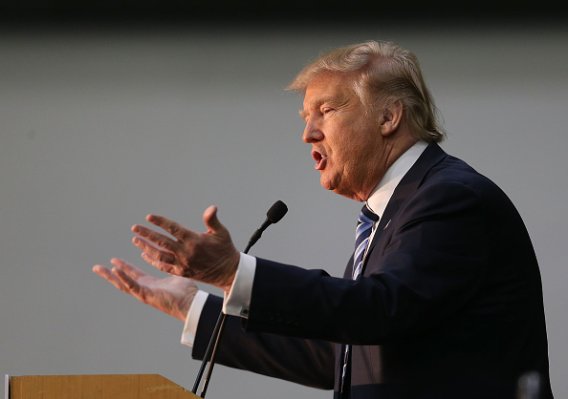