The segment of the show belonging solely to Coldplay was the set’s worst. Though the band was the halftime show’s notional headliners, it was the least relevant-seeming of the three acts onstage. Bruno Mars and Beyoncé had been invited, the language around the show suggested, as a nod to the franchise’s “history,” and yet they felt far more urgent and intriguing than the British band, whose act was also plagued by significant audio problems. Lead singer Chris Martin’s onstage leaps felt like an attempt to gin up the sort of enthusiasm that Mars, with the opening bars of his hit “Uptown Funk,” generated organically.

Mars and Beyoncé are a part of halftime show history, sure, but it’s very recent history. They performed on the world’s biggest stage two and three years ago, respectively. (One wonders whether Katy Perry, last year’s headliner, felt snubbed.) Before the show began, I was among those who questioned what, exactly, the pair of performers were thinking: Beyoncé in particular seemed to have said everything she needed to say with a refined and incredibly ambitious Super Bowl solo set. Why tempt the fates by going for a second act, as someone else’s support?

And yet the two transcended not merely expectations but Coldplay’s tepid set. Indeed, the British band practically disappeared for minutes as first Mars, then Beyoncé performed recent hits, “Uptown Funk” and Beyoncé’s new hit “Formation,” then took part in a dance-off. That the latter star announced the Formation World Tour in an ad immediately following the set felt apt; she has clearly entered a new era, building on the themes of social consciousness and complicated feminism present in her prior work (and in her 2013 Super Bowl set). Mars had a new hit to perform; Beyoncé, in putting forward a new song that’s about her pride in her race and dressing in militaristic regalia that recalled the Michael Jackson of 1993, had new things to say.

Strangely, what the halftime show did best, though, was fun. Not the forced fun of Martin giddily skipping through songs from 2008, but the genuine (or genuine-seeming) enthusiasm of Beyoncé and Mars’s dance-off to “Uptown Funk,” or, once Martin re-entered the fray, the trio singing about the history of the halftime show as images played.

Sure, it was meant as a paean to all halftime shows, or a platonic ideal of celebrity spectacle that exists only in the viewer’s imagination. But the one it specifically recalled was the 2001 show, in which NSYNC, Aerosmith, and Britney Spears cavorted in a loose, carefree way, more concerned with projecting an image of fun and inclusiveness than hitting their marks. Beyoncé’s choreography in “Formation” was impressive, as were the visual effects overlaid on the field. But what was most unusual for a franchise whose recent years have been marked by decadent costuming and extravagant stagecraft was just how much it seemed all involved were genuinely enjoying themselves, unfreighted by ideas of building their fame (Coldplay has been successful for years now, and Beyoncé and Mars have nothing to prove). Rarely has a break in play during the year’s most watched TV event seemed quite so refreshing. 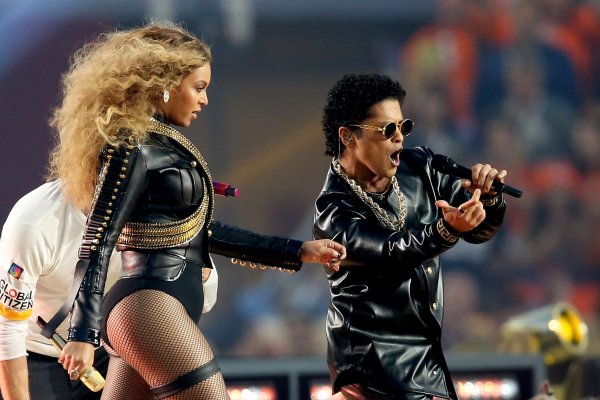