Marco Rubio upped his share of the chatter online during Saturday’s Republican debate, according to Internet search and social media data.

Donald Trump, as usual, hogged much of the spotlight with 29% share of the Twitter conversation, but Rubio lead among the rest of the pack at 18%-four points ahead of rival Ted Cruz.

Rubio had a good showing on social media leading up to the debate, managing to capture some of the momentum from Iowa to replace Cruz as the second most mentioned Republican on social media.

While Trump was the most searched candidate in America, Rubio won out in Google searches from New Hampshire, which is holding its primary race on Tuesday.

New Jersey Gov. Chris Christie may have scored points with voters on Saturday, as he experienced an uptick in follower growth on Twitter—second behind Trump.

Among the highest number of mentions on Twitter came when the audience booed Trump after he told former Florida Gov. Jeb Bush to be “quiet,” and Christie saying “There it is” in reference to Rubio’s line about President Obama repeated four times.

The Independent Journal Review’s Cheer Along tool—which allows users to either cheer or dislike moments during the debate—showed much more dislikes (53%) than cheers (47%) Saturday.

The debate in New Hampshire is days before the state’s primary. Social media data, particularly in-state Twitter conversation, was somewhat predictive of the results at the Iowa caucuses. 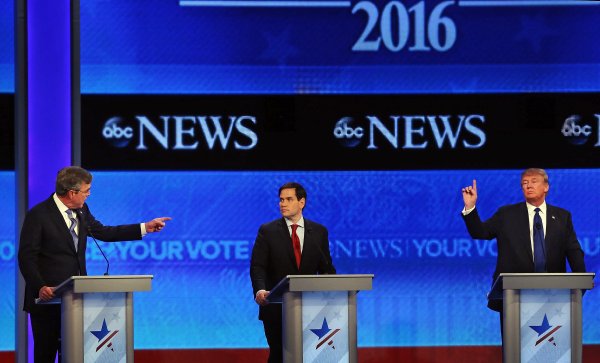