Cruz and Carson Argue Over Iowa Emails at Debate

Texas Sen. Ted Cruz apologized for a controversial campaign email that may have led some Iowans to believe retired neurosurgeon Ben Carson was dropping out of the race just as the caucuses began last week.

But he also blamed cable news channel CNN for the imbroglio.

The two Republican presidential candidates, who are fighting for many of the same Evangelical voters, went back and forth over the email.

“My political team saw CNN’s report, breaking news, and they forwarded that news to our volunteers,” Cruz said.

He then laid out a complex timeline of news releases and email blasts that ultimately Cruz said he “apologized.” Carson wasn’t convinced, countering that the report had been cleared up shortly after it went out.

“The timeline indicates that initial tweet from CNN was followed by another one within one minute, that clarified that I was not dropping out,” Carson said. “But the bottom line is we can see what happened, everybody can see what happened and you can make your own judgement on that one.”

The Twitter post in question was from CNN’s Chris Moody, who reported initially that Carson would head home after Iowa to rest. Moody quickly followed up with a statment from the Cason campaign, saying that he would not drop out of the race.

Carson criticized Cruz earlier in the week for the incident, holding a press conference in “response to deceptive Iowa caucus tactics,” where he told reporters that he wasn’t so convinced of Cruz’s innocence.

“He could very well have not known about it,” Carson said. “But it is obvious that there are people in his organization who not only knew about it, but who carried it out and executed it.” 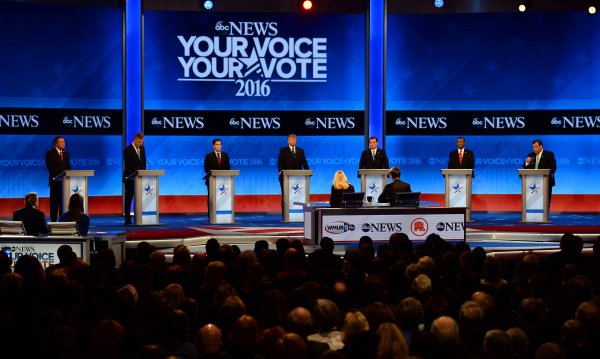 Watch the Most Awkward Debate Introductions Ever
Next Up: Editor's Pick