The final debate before New Hampshire’s primary got underway Saturday night with Ted Cruz facing criticism from Donald Trump for not being forthright and from Ben Carson for campaign fibs last week in Iowa.

The scene was set for a close-quarters brawl in a state where Donald Trump has a sizable lead in the polls but also has vast numbers of voters still undecided. Despite millions of dollars in television ads and unrelenting phone calls from campaigns and their allies, many voters still aren’t sure which candidate will earn their backing.

“If you notice, he didn’t answer your question,” Trump said of Cruz.

Soon after, Carson added to the criticism of Cruz, lambasting him for his campaign’s tactics in Iowa. “It gives us a very good example of certain types of Washington ethics,” he said. “My ethics? You do what’s right.”

The ABC News debate was looking to make the candidates confront each other. While it’s easy to criticize from afar, it’s tougher on the same stage. The candidates proved up to the task, with Cruz and Sen. Marco Rubio of Florida taking the toughest attacks.

“Experience is not just what you did but how it turned out,” Rubio shot back, noting that New Jersey’s credit ratings have dropped under Christie.

In a snappy retort, Christie said Rubio’s approach was typical in Washington. “The drive-by shot at the beginning and the memorized 25-second speech,” Christie said.

Trump was looking to steady his campaign. His polling advantage evaporated in Iowa as tens of thousands of unexpected voters turned out to support Ted Cruz. Rubio chased Trump, almost besting him, too.

Rubio’s momentum in New Hampshire is real. He is drawing solid crowds and his campaign for months has built a lean but fierce political machine. He is fighting for a second-place finish in New Hampshire, but he is fending off aggressive campaigns from the governors — Jeb Bush of Florida, Christie of New Jersey and John Kasich of Ohio—who have made New Hampshire their first real stand.

The campaigns that did not include Trump were hoping Saturday’s debate might be his undoing. Where his rivals have built sophisticated voter-identifying data platforms, Trump relied on his celebrity and bluster. In New Hampshire, there’s little history of that working. 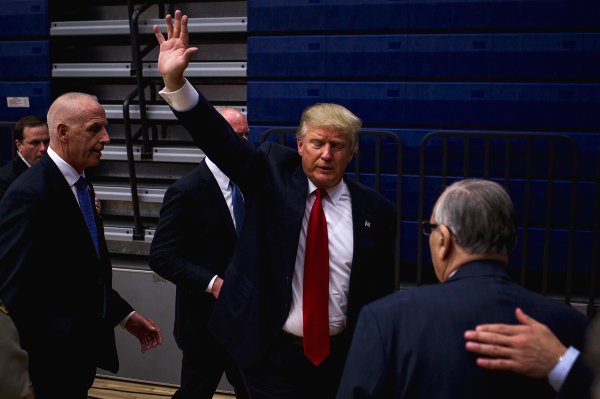 Why Republicans Keep Promising Not to Embarrass Iowa Voters
Next Up: Editor's Pick