Republican presidential candidate Carly Fiorina has not relented in her push to be included in Saturday’s Republican debate in New Hampshire.

CARLY for America, the super PAC backing the former Hewlett Packard CEO, released a video on Saturday, calling ABC the “Anybody But Carly” network.

“Tune in as we exclude Carly Fiorina but include people she beat,” the video says. “On Anybody But Carly, we rig the game.”

Candidates were only eligible for the debate if they finished in the top three in Iowa, placed in the top six in averages of national polls or New Hampshire polls. The only two candidates who didn’t make the cut were Fiorina and former Virginia Gov. Jim Gilmore.

Fiorina launched a campaign to be included in the debate, and other presidential candidates and politicians voiced their support.

Fiorina finished ahead of Republican candidates Chris Christie and John Kasich in the Iowa caucuses, but both are in the debate on Saturday.

“She has earned a spot,” said Newt Gingrich, a former Republican candidate and former Speaker of the House.

“But on Disney’s ABC, we’ve Frozen Carly out, turned the debate Inside Out—all part of our Mickey Mouse operation,” the video says. 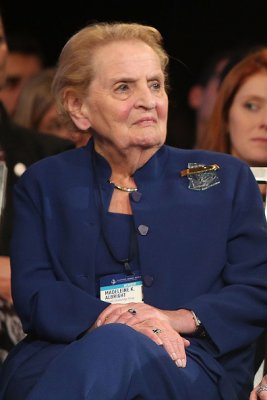 Madeleine Albright Makes Pitch to Younger Women for Clinton
Next Up: Editor's Pick