Police officers, part of beefed-up security to prevent sexual assaults, stand near the central station in Cologne on Feb. 4 as Carnival kicks off.
Patrik Stollarz—AFP/Getty Images
By Katie Reilly

A woman reporting on the annual Carnival festival in Cologne, Germany was groped during a live television broadcast on Thursday.

Police are now searching for suspects who made obscene gestures behind reporter Esmeralda Labye, kissed her on the neck and touched her breast during the broadcast, CNN reported.

The incident comes after hundreds of women in Cologne said they were groped on New Year’s Eve by men of North African or Arabic descent. The incident fueled protests against Chancellor Angela Merkel tolerant policy toward refugees.

Labye, who was reporting for a Belgian news station, said Thursday’s incident, during the Women’s Carnival celebration, was unrelated.

“I’d like to emphasize, and this seems important me, that the incident has been caused by young men speaking German,” Labye said. 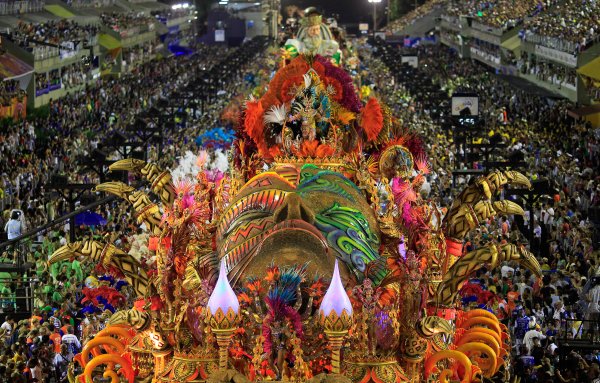 These 12 Facts Explain Why Rio's Carnival Is the World's Biggest Party
Next Up: Editor's Pick