Hillary Brings Her 'Sisters' on the New Hampshire Trail

Hillary Clinton spent the day campaigning with three of her former Senate colleagues: Minnesota’s Amy Klobuchar, Michigan’s Debbie Stabenow and Jeanne Shaheen from New Hampshire—or the “sisterhood of the traveling pantsuits,” as Klobuchar called them.

The women held events in Manchester and Nashua and also included Lily Ledbetter of equal pay fame, and Stephanie Schriock, the head of Emily’s List, a group that elects pro-choice Democrats that has endorsed Clinton.

Clinton, who is trailing Vermont Sen. Bernie Sanders in New Hampshire in some polls by as much as 29 points, is hoping that the women of New Hampshire might help close the race for her. In 2008, Clinton won the primary on the strength of female voters, who swung for her 46% to Barack Obama’s 34%.

“There’s always been a gender gap here,” Jennifer Palmieri, Clinton’s communications director, tells TIME. “But it’s more than that, having her friends here is fun for her. It’s a morale booster. She loves that sisterhood from the Senate.”

The senators made it clear which of their colleagues they’d prefer to see in the White House. Both Shaheen and Stabenow took digs at Sanders’ fumbling of foreign policy in Thursday night’s debate. “She knows the countries, knows where they are. She not only knows the geography, she knows the players.” Shaheen told the Nashua crowd. “I find it interesting when people say that we’re supporting her because she’s a woman. Have you ever heard of a man saying he’s supporting Bernie because he’s a man?”

For her part, Clinton talked about how great it was to travel with former colleagues. “It’s a wonderful feeling to have people who know you and have your back,” she said. “I know that I’ve got some ground to make up—I’m ready!” 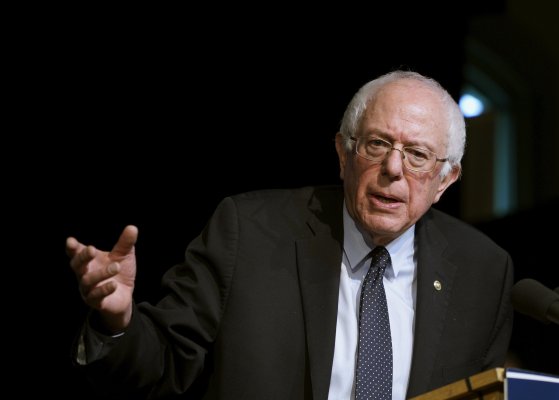 Sanders Calls On Clinton to Make Social Security Pledge
Next Up: Editor's Pick