Jorge Ramos: The Campaign Helps Reveal the Future of TV

After the massive ratings of the Super Bowl and the presidential debates, it would be crazy to suggest that television is dying. It is alive and still producing billions of dollars in annual revenue. What is changing, though, is how people watch the programs and events produced by big television networks as well as Hollywood and New York companies creating content.

There’s a huge migration of eyeballs from television screens to cellphones, tablets and laptops. More and more people prefer to watch their favorite shows at a time and a place of their own choosing. Appointment TV only happens when you are waiting for the doctor. At the same time, social media—Facebook, Twitter, Instagram, Snapchat…—is replacing traditional TV as the place to be informed and entertained.

This major audience revolution is already affecting the way we broadcast news. Those of us who have been working for decades on network and cable television are fighting hard not to become tv-saurus. And the only way to survive this irreversible process is to go where the audience is (or to be extinct from the face of the digital earth).

So that’s precisely what we did recently in Iowa.

I have been working for the Spanish-language network, Univision, for the last 30 years and for Fusion for more than two. For breaking news or important current events, we normally travel with a very professional crew of cameramen, producers and book expensive satellite feeds. Many times it ends up being a logistical nightmare, but that’s the nature of television: looks smooth but it is incredibly complicated. However, for the caucuses in Iowa, we broke all the rules.

I travelled to Des Moines with a tiny group and broadcasted the first elections in the nation in 2016, in English and Spanish, through a cellphone on Facebook. That night I was off the air on Univision and Fusion. No cameras, no satellites, no set, no Diva lights, no TelePrompter. It was just Fusion’s journalist Nando Vila, The Root’s Dr. Jason Johnson and me talking to the voters and being a witness to the basics of democracy. Only on Facebook.

Facebook has a formidable system that allows you to broadcast live, anywhere in the world, for up to 90 minutes. You can do it, too. Imagine a one-way FaceTime with thousands of people. This state-of-the-art technology allows any citizen to become a journalist and any journalist to challenge the establishment media. As it normally happens with a cellphone in a crowded place, we lost our signal a couple of times and the camera shots were raw and amateurish at best. But it provided the audience something that is craving for: authenticity. It was the closest thing to being there.

The numbers were amazing. Facebook reported that up to 2.6 million people viewed part of our election coverage through different platforms. In comparison 3.7 million watched CNN and 4.4 million watched FoxNews that night, as reported by CNN’s Brian Stelter. It’s true: I’m not comparing oranges to oranges, and our coverage didn’t include election results, speeches from the candidates, reporting from many caucuses and extensive analysis. But we were there, just with a cellphone, and many people watched. It was, literally, an eye-opening experience.

This trend will continue. More and more people are discarding their old TV sets and getting their news and entertainment on smaller screens. Also, social media is becoming the new media. Period.

As a journalist—I suppose some people might even call me a news veteran—I want to survive this new television revolution, and the only way to do it is following the audience where they are. The problem is that we don’t know yet how to monetize our content, our expertise, our credibility and our news programs once they move to social media. It’s still pretty costly to produce a good hour of news (even if you broadcast through an iPhone or an Android). Think salaries, hundreds of working hours, research, travel and accommodations. But right now television companies are paying through this transition in the hope that a new revenue model will appear soon. It’s really a long-term investment.

Meanwhile, only the television companies that produce shows, videos and news that people actually watch, will survive this technological and social disruption. The rest are stuck with a remote control and the batteries running low.

The future of TV is not on TV. It’s on the smaller screens we are all using in front of the television set. 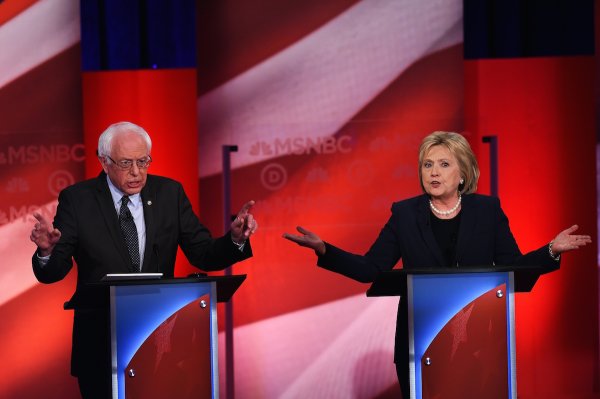 Hillary Clinton, Bernie Sanders and the Real Definition of 'Progressive'
Next Up: Editor's Pick