A day after a hard-fought debate in New Hampshire, a more combative Bernie Sanders called on Hillary Clinton on Friday afternoon to pledge to expand Social Security benefits, challenging his opponent on a top issue for progressives.

Sanders has made expanding Social Security payouts to seniors a central part of his campaign. “I ask Secretary Hillary Clinton to join me in making it very clear that, number one, she will not support any cuts to Social Security,” Sanders said at a town hall in Exeter, N.H. on a snowy Friday.

“And number two, that she will join me in saying it is imperative that we increase and expand benefits for senior citizens and disabled veterans on Social Security,” Sanders continued.

Clinton has pledged to expand Social Security for widows and has also said she is open to increasing taxes on the wealthy to put more funding into the program, but she has not committed to expanding the program as Sanders has, something grassroots progressive groups have called for.

When Sanders tweeted later on Friday at Clinton and repeated his pledge asking her not to cut Social Security, the former secretary of state shot back, saying “I’ll expand it” and adding “enough false innuendos.”

Sanders has differentiated himself from Clinton on Social Security before, but has never called on her to pledge to expand it. His plan would raise the cap on taxable income for Social Security, requiring those making over $250,000 to contribute the same percentage of this income as middle-class families. That would increase Social Security benefits to seniors by an average of $65 a month.

“We have millions and millions of seniors trying to get by on $11,000, $13,000 a year in Social Security benefits,” said Sanders on Friday in Exeter. “Trying to buy some bread, some food, some medicine, trying to keep their house warm. You know what? You can’t do it on 12,000 a year.”

Sanders’ challenge over the widely popular government program comes as he and Clinton debate their progressivism, with Sanders saying he doubts the former Secretary of State’s commitment to liberal values due to her large Wall Street campaign contributions. Clinton has shot back, saying Sanders’ standards would exclude President Obama and most prominent Democrats from being progressive.

Progressive groups like Democracy for America and Progressive Change Campaign Committee have called on Democratic candidates, including Clinton, to commit to expanding Social Security benefits. 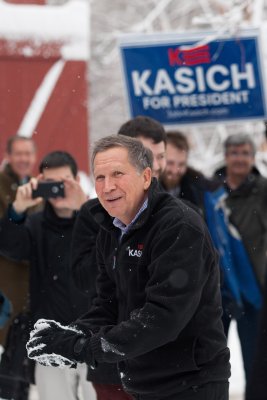