How Health Experts Will Definitively Link Zika to Birth Defects

Dr. Vanessa Van Der Linden, a neurologist at the Associacao de Assistencia a Crianca Deficiente, measures the head of a baby with microcephaly in Recife, Brazil, Feb. 1, 2016. This center has seen 69 children with microcephaly so far.
Sebastian Liste—NOOR for TIME
By Alexandra Sifferlin

There are several factors of the Zika virus that make it an alarming disease, including the fact that public health experts around the world are still racing to understand it.

Scientists still can’t say for certain that Zika causes the birth defect microcephaly, though several experts, including government health officials, agree the current evidence is convincing. “The evidence is highly suggestive but we don’t have definitive proof yet,” U.S. Centers for Disease Control and Prevention (CDC) director Dr. Tom Frieden told TIME in an interview.

Beyond reaching a definitive conclusion that the virus and the brain damage are linked, scientists also want to know how they are linked. For instance, what is it about the Zika virus that allows it to pass the normally protective placenta? “We identified the Zika virus in brain tissue. That still doesn’t prove that it is the cause or the only cause,” says Frieden.

“For more than 50 years we have not identified another viral cause of microcephaly,” he adds. “It’s new, it’s unknown, it’s scary, and for the pregnant women and infants it’s a terrible tragedy. Over and over nature throws us wildcards.”

In the meantime, families in countries like Brazil face the consequences. “We continue to receive information about new microcephaly cases every day,” says Claudio Maierovitch, director of the department of communicable disease surveillance at the Brazil Ministry of Health, in an interview with TIME. “Our laboratories are working and they are identifying the virus in tissues that have never been seen before like liver and placenta. It’s new but it’s not enough. It’s the beginning, it’s knowledge building.”

The kind of research needed to give families more answers requires time and collaboration. According to some researchers interviewed by the Associated Press, scientists are not getting Zika specimen in a timely manner, largely due to Brazilian laws that make it very difficult to share genetic material.

It’s not that Brazil is keeping all the specimen to itself, say government health officials in the U.S. and in Brazil, but there is bureaucracy that makes moving the samples time-consuming and difficult. “It needs to be said that the red tape has to come down,” says Dr. Ernesto Marques of the University of Pittsburgh Center for Vaccine Research and Graduate School of Public Health, who has long been conducting research in Recife, Brazil, where cases of microcephaly are in the hundreds. “It’s not like Brazil doesn’t want to share samples with the other countries. It’s not like that… This is business as usual. This is the normal way. The issue is that Zika created an emergency situation that clearly shows the flaw of the system and really exposes the problem. [It’s] a slow process that’s cumbersome that most researchers are not familiar with.”

Still, there are several research groups based in Brazil and abroad that are taking different approaches to find the answer. Marques’ research team is currently studying a cohort of people with fever symptoms over the long term to understand how their antibodies respond to mosquito-borne infections like dengue and Zika. They are also working to compare the immune responses of pregnant women with the Zika virus to women with Zika who are not pregnant. His lab also recently confirmed the presence of Zika virus in the brain tissue of 12 infants with microcephaly in the Brazilian state of Pernambuco.

The CDC will also soon kick off a case-control study examining infants with microcephaly and compare them to infants of similar ages without microcephaly to see what differences there may be in the babies’ risk factors and other exposures. The agency recently completed the initial enrollment phase of a similar trial looking at the connection between Zika and Guillain-Barré syndrome, another neurological disorder that has been linked to the Zika virus. Other researchers are trying to learn what the differences may exist if a pregnant women gets Zika in her first month of pregnancy versus her sixth.

“Right now I think the definitive proof will come up with a good epidemiology study where the cases and the controls are very well studied for the presence of the virus,” says Marques.

There’s some early speculation that there may be additional factors that play into whether Zika causes microcephaly. For instance, several researchers TIME spoke to say they are curious whether there are other confounding factors like a separate infection or environmental exposure that increases the odds of the disorder.

In the meantime, families affected by the virus are left largely in the dark about what will happen to their babies down the line. Doctors and scientists remain uncertain about how the babies will develop as they grow. “Something that really makes me sad was the lack of information that the mothers have,” says Dr. Maurício Lacerda Nogueira, a dengue researcher based in the Brazilian city of São José do Rio Preto who recently observed several babies with microcephaly in the city of Salvador, Brazil. “One mom asked me, ‘the head of my child is still going to grow, right doctor?’ I had to step out of the room and breath three times.” 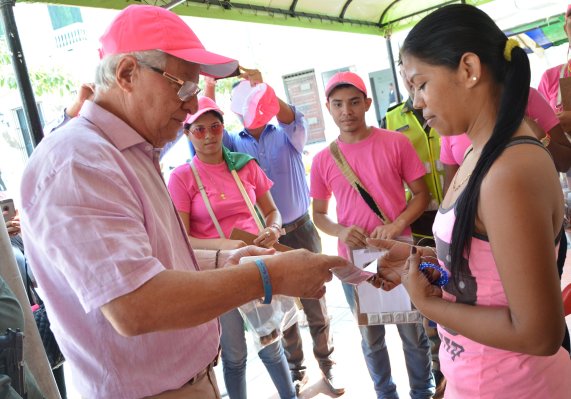 A Nervous Colombia Hosts Carnival in the Time of Zika
Next Up: Editor's Pick