11 Animals That Have Predicted a Super Bowl Winner

On The Tonight Show Thursday night, host Jimmy Fallon brought puppies onto the show to predict whether the Denver Broncos or Carolina Panthers would win Super Bowl 50. He inferred their picks based on which food dish they chose to eat out of. They flocked to the Broncos bowl, meaning Denver fans should be cautiously optimistic. The pups’ track record over the years hasn’t been totally accurate, but it has been totally adorable.

The dogs weren’t the only animals to “predict” the winner of Super Bowl 50, though. Here are other adorable ones nationwide that have made Super Bowl picks so far.

Talk show hosts Kelly Ripa and Michael Strahan raced two teacup piglets dressed in the teams’ colors on LIVE! with Kelly and Michael. Ripa could not keep a straight face as she described the contest rules: “when the music begins, we’re going to put down our pigs and coax them to the finish line with piggie treats, which look like fruit loops.” First to the finish line would be the winner. In a tight race that will make viewers squeal with excitement, the pig in the Broncos t-shirt won.

You won’t need slow-mo instant replay for this play. Two Galapagos tortoises at the Dallas Zoo named Nancy and Twelve were so slow to pick up on the race that they had to be picked up by their shells and moved to the “football field.” Nancy picked the Broncos to win by being the first to nibble on a Denver-themed cake made out of vegetables and fruit. Baby red-footed tortoises at Moody Gardens in Galveston, Texas, slowly made their way across a mini football field towards their end zones at opposite ends, where their favorite foods, flowers and fruit, had been placed. Most of the reptiles headed to the Panthers’ end zone.

Teddy Bear the Porcupine, in a video posted by Zooniversity, picked an ear of corn out of a container that had a photo of a Denver Broncos helmet on the outside in a video for Zooniversity, a wildlife education company.

“Le Le,” the male panda at the Memphis Zoo, wrapped himself in a scented sheet with the Panthers’ team logo.

Tibet, a tigress, made her pick by chasing after remote-controlled cars decorated with the teams’ logos before pouncing on the Panthers one at the Myrtle Beach Safari in South Carolina.

At the Hogle Zoo in Salt Lake City, Utah, the year-old Orangutan Tuah “kissed” a papier-mache Panthers helmet. He is the son of an orangutan named Eli who picked seven straight winners of the big game. His older sister picked the Broncos but putting the team’s helmet on her head.

Ozzy, a 700-pound grizzly bear at ZooMontana in Billings, decided to eat the banana cake with peanut butter frosting that was on top of a Broncos sign.

Apollo the Lion chose to tear up a Broncos-themed piñata in his enclosure at the Riverside Discovery Center in Scottsbluff, Nebraska.

Otis the hedgehog predicted both a Panthers win and and six more weeks of winter after he was called in to take over Groundhog Day duties in West Orange, N.J. because its marmot was hibernating. 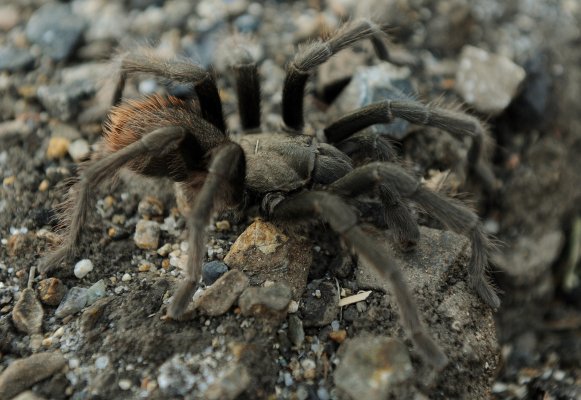