How Donald Trump Explains His Platform Through Profanity

If Donald Trump’s campaign for President were a film, it probably would carry a PG-13 rating.

The blunt billionaire often bullies his way against enemies and foes. But he also likes to sprinkle in some colorful language. Here are some of the highlights from Thursday night’s hour-long rally.

— On career politicians? “You can tell them to,” and here he paused for effect, allowing the audience to find the right verb, “themselves because they let you down.”

— When discussing corporations who move abroad for tax advantages—“inversions,” in business speak—Trump said his rivals were dummies. “They don’t even know what the hell it means.”

— On foreign affairs? “Afghanistan is going to hell.” A follow-up promise: “We’re going to knock the shit out of ISIS.”

— On President Barack Obama’s vacation to Hawaii? “I’d want to stay in the White House and work my ass off.”

— On China’s building of military bases in the South China Sea? “They’re ripping the shit out of the sea.”

— On trade deals? “We’re going to win on trade and piss people off.”

— On voters? “They want someone who knows what the hell is going on.”

Trump, never one to show too much concern about self-awareness, said the characterizations of him as a bully were wrong. “People don’t realize, I am much warmer than other people,” he said. “I want to help people.” 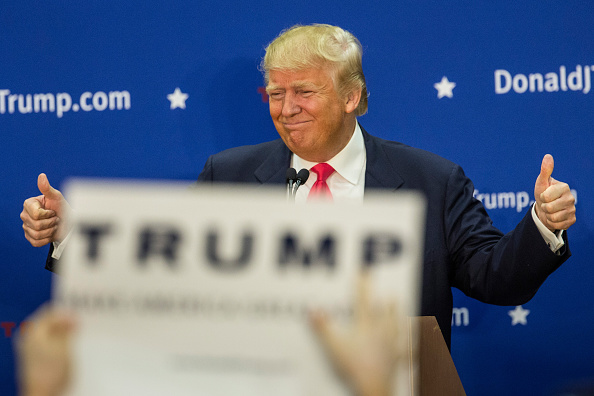 Donald Trump Brags His Way Through New Hampshire
Next Up: Editor's Pick