Man Sucked from Somali Jet May Have Been Suicide Bomber

A view from inside the airliner after an explosion aboard on February 2, 2016.
Anadolu Agency—Getty Images
By Julia Zorthian

A passenger sucked from a Somali commercial jet on Feb. 2 after an explosion blew a hole in its fuselage may have been a suicide bomber, according to a new report.

Investigators suspect the bomber used a wheelchair to smuggle an explosive device on board the Daallo Airlines plane, the Wall Street Journal reports, citing an anonymous Western diplomat as a source. He was expelled from the cabin in the explosion, and authorities recovered his body about 20 miles from Mogadishu.

“An individual got onto the plane in a wheelchair and is suspected of being the suicide bomber,” the diplomat said.

After the blast, the Djibouti-bound plane performed an emergency landing back in Mogadishu. The pilot told the AP he thought the explosion was a bomb blast, but officials said they had not determined the cause. Two people on board suffered minor injuries. 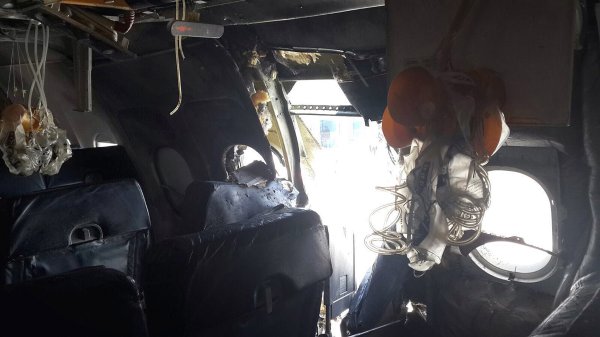 Explosion on Airliner Over Somalia Injures 2
Next Up: Editor's Pick