Melissa Benoist: What Playing Supergirl Means to Me

From the get-go, I knew this role was important. But when I got it, I experienced an immense sense of relief. I knew that playing Supergirl was going to be the hardest work I’d ever done, but I was also relieved that I’d been given the chance to do it. I just felt totally up for the challenge.

I read a lot of the comics and I trained really hard—but I also like to think that there’s just a part of me that grew up in a way that prepared me for this role. I come from this matriarchal family where I didn’t have many boy cousins. It was all girls running around, and my mom had only sisters and I had mostly sisters. So we just had this really strong, feminine family and were really all go-getters. I think that rubbed onto me and helped in facing this role and creating Supergirl.

One other thing I think it’s important to note is that I didn’t just draw from female inspirations. One of my favorite movies is Hook, and I felt Robin Williams really embodied a lot of traits I thought Supergirl should have. That’s just part of the beauty of this show: It’s so important for gender equality that this is happening and that it’s the right climate for it, but what I absolutely love is that it doesn’t ultimately matter that Supergirl is a woman. This is something that boys and girls, men and women can all enjoy and get something out of.

My mom told me that she had a really hard time watching the fight scenes when she first watched the show. She was cringing and said she didn’t want to see me get beat up by a man, but I think the more the show goes on, the more you see this fierceness and what women are really capable of. It puts her on this equal playing field.

This means the most to me when I see the actual physical manifestation of what I’m doing and how this is sinking in with children. I get videos sent to me all the time with people saying, “Look at my daughter: She asked me to make her a cape and is flying around the house.” That’s so meaningful to me to help children understand that girls can have just as much fun as their male counterparts in the superhero world. It’s about confidence and hope, and Supergirl really embodies all of that. 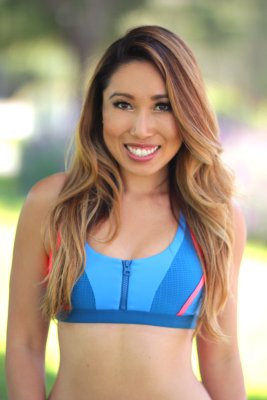 How Blogilates Star Cassey Ho Deals With Body Criticism
Next Up: Editor's Pick