Martin Shkreli, the former chief executive of Turing Pharmaceuticals who catapulted into notoriety last year after rapidly increasing the price of a life-saving drug by 5,000%, made a mockery Thursday of a House Oversight Committee hearing on the rising price of drugs.

During the marathon hearing, Shkreli smirked, mugged for the camera, and refused to answer lawmakers’ questions on the grounds that doing so would incriminate him in an upcoming criminal trial. Less than an hour after being escorted from the House, Shkreli mocked the lawmakers on Twitter. “Hard to accept that these imbeciles represent the people in our government,” he wrote.

South Carolina Rep. Trey Gowdy, the Republican committee chairman, said he was “vexed” by Shkreli’s repeated statement that he was invoking his constitutional right to “plead the Fifth,” and reminded the 32-year-old multi-millionaire that he could answer questions that didn’t have to do with his trial.

Shkreli smirked. “I intend to follow the advice of my counsel, not yours,” he said, twice.

Later, Maryland Rep. Elijah Cummings, the ranking Democrat on the committee, begged Shkreli to use his position, both as an influential shareholder at Turing and as an increasingly famous social media personality, to advocate for patients’ rights. During Cummings’ several minutes-long speech, Shkreli repeatedly looked away, smiled, and briefly appeared to be posing for pictures.

“I see you’re smiling, but I’m very serious, sir,” Cummings said. “The way I see it, you can go down in history as the poster boy for greedy drug company executives, or you could change the system. … Yeah, you.”

Thursday’s hearing was focused on Turing and Valeant Pharmaceuticals, both of which have rapidly driven up the price of drugs in their portfolios that they did not invent. Turing and Valeant have both turned over tens of thousands of pages of documents to Congressional investigators. The reams of internal emails, memos and conversations indicate that both companies prioritized the maximization of profits over patient access to their drugs, and call into question the company’s promises that it intended to roll the new revenue into research.

The findings echoed those of a previous Senate investigation, which found that the global pharmaceutical company Gilead, in increasing the price of a hepatitis C drug to $84,000, had done so solely to maximize profits despite awareness that patients could not longer afford the life-saving drug.

Shkreli, who was dressed in a slick black jacket, has become the poster boy of the pharmaceutical industry in recent months. He was arrested last year over fraud allegations concerning a hedge fund he managed from 2009 to 2014, and in December, he resigned from Turing, but remains the company’s majority shareholder.

His fame comes in part from Turing’s decision last year to buy the rights to the drug Daraprim, which treats a serious parasitic disease, and then immediately raise the price per pill from $13 a pill to $750.

At the hearing Thursday, Nancy Retzlaff, the chief commercial officer at Turing, defended the company’s decision on the grounds that the revenue from that price hike would be rolled back into research and development for new life-saving drugs. Retzclaff also said that two-thirds of patients who use Daraprim end up paying one penny per pill, due to a steep discount offered through Medicare and Medicaid, and that the company funds an assistance program for uninsured, low-income patients.

Despite lawmakers’ efforts to determine who bears the brunt of the full $750 per-pill cost, the hearing ended largely in confusion. Insurance companies, hospitals, and patients who do not qualify for low-income assistance can be asked to pay up to $30,000 for a bottle of the pills. By about hour-three of the hearing, Republican lawmakers began focusing in on “burdensome regulations” at the Food and Drug Administration which slow the approval of new generic drugs.

Janet Woodcock, the director for the center of drug evaluation and research at the FDA, Howard Schiller of Valeant Pharmaceuticals, and Mark Merritt of the Pharmaceutical Care Management Association also testified at the hearing.

Shkreli was forced to attend Thursday’s hearing under subpoena that he repeatedly threatened to ignore. 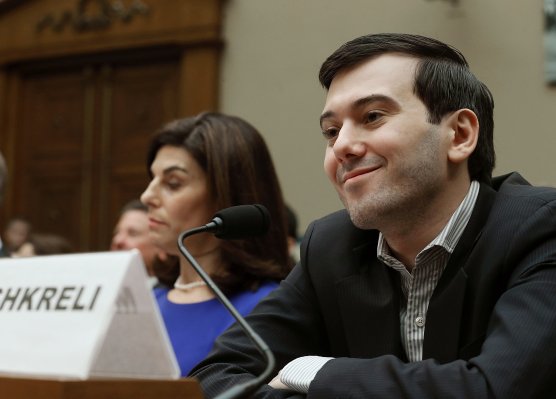