And Then There Were Nine

And then there were nine. Rick Santorum and Rand Paul became the latest two campaign drop-outs Wednesday as their efforts never really got off the ground. For Santorum, catching lightning in a bottle in Iowa again proved impossible in a far more talented field and with an electorate far more angry than four years prior. For Paul, his poor performance reflected both increased fears over national security that didn’t serve the libertarian candidate well as well as his shifting positions on issues that were close to his supporters’ base. Santorum endorsed Marco Rubio as he exited, but Thursday morning presented a gift to his opponents when he told MSNBC of Rubio, “The bottom line is there isn’t a lot of accomplishments.”

Hillary Clinton speaks to TIME’s Joe Klein on the cover of this week’s magazine, reflecting on the state of the electorate and her own transformation from radical to establishment figure. Also in the magazine, TIME’s David Von Drehle captures the state of the GOP race, from Donald Trump‘s loss to Ted Cruz‘s win, and the coming race among the establishment in New Hampshire. And a look at Rubio’s slow-and-steady campaign meeting the demands of a surging candidacy.

Trump is resisting changing course after his second-place finish in Iowa, declining to invest significantly in a ground game in the Granite State where he holds a lead, but he faces the prospect of blowing it if he’s not careful. Instead he’s accusing Cruz of “illegally stealing” the caucuses because his caucus speakers falsely suggested that Ben Carson was dropping out after Iowa. Cruz apologized to Carson, who held a bizarre press conference Wednesday defending his decision to return home to change clothes and seeming to criticize Cruz, but refusing to do so by name.

Jeb Bush will bring his brother, George W., out with him on the campaign trail in South Carolina next week, seeming to remove the possibility of him dropping out if he underperforms in New Hampshire. Carly Fiorina is waging a public effort to be invited to Saturday’s GOP debate, standing to be one of two—well, one of one if you exclude Jim Gilmore and his 12 caucus votes in Iowa—candidates to fail to meet the debate criteria. Such a tactic worked in September, but ABC and the Republican National Committee have yet to respond to her effort. And Chris Christie addresses the Obama “hug.”

Hillary on the Race, Her Rivals, and Angry Voters
“It’s always hard,” she tells TIME’s Joe Klein in this week’s magazine

Christie: Obama ‘Hug’ Never Happened
The New Jersey governor volunteers his side of the story in New Hampshire [TIME]

What Marco Rubio Must Do Next
He prospered by laying low. Can it last? [TIME]

At Mosque Visit, Obama Seeks to Mend Fences Between Muslims and the West
Seeking to counter the message of Trump [Washington Post]

“Look at today. He gave a speech at a mosque, basically implying that America is discriminating against Muslims. Of course there’s discrimination in America, of every kind. But the bigger issue is radical Islam. This constant pitting people against each other, I can’t stand that,” he added. “It’s hurting our country badly.” — Marco Rubio responding to President Obama’s speech at a mosque Wednesday

“We’re liable to wake up one morning and Donald, if he were president, would have nuked Denmark.” — Ted Cruz on the prospect of a Trump presidency, left unsaid his promise to bring back “carpet-bombing” as U.S. policy

Fiorina Fights to Get Invited to New Hampshire Debate [TIME]

How Hillary Clinton Is Trying to Avoid Being ‘Shrill’ [TIME]

Why Obama Is Underplaying a Major Accomplishment [TIME]

The Birthplace of Every Presidential Contender in One Map [TIME]

New Jeb Bush Ad in New Hampshire: ‘I Know How to Do This’ [Washington Post] 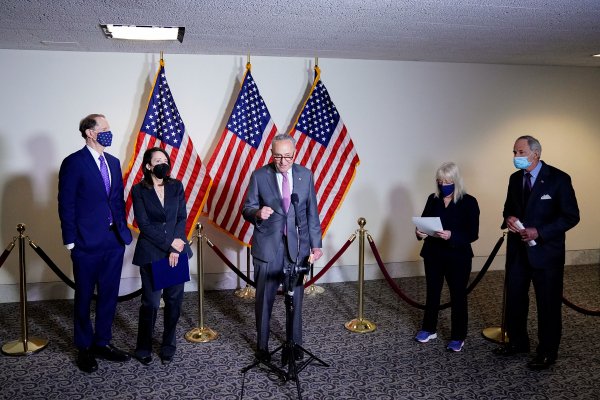 There’s Nothing Stopping Democrats from Going it Alone on Infrastructure — Except Democrats
Next Up: Editor's Pick