People hold up signs and a tent during a protest to demand city officials do more to help homeless people outside Super Bowl City, in San Francisco on Feb. 3, 2016.
Eric Risberg—AP
By Katy Steinmetz / San Francisco

A few yards beyond that faux city’s gates and metal detectors, at least 100 protestors lined up on a sidewalk to protest the roughly $5 million that local taxpayers are spending to help support Super Bowl week amusements like the “city” — and to demand that the leaders of San Francisco spend more money on the thousands of homeless residents in the Bay Area.

“You can spend $5 million on a big half time party. You can spend $5 million on a big show. But you can’t feed homeless people?” a protestor named Joshua Shrader shouted through a megaphone, wearing a T-shirt that said “Tackle Homelessness” and a button for Democratic candidate Bernie Sanders. Behind him, other protestors hoisted green tents in the air, decorated with messages such as “Right to Rest.” Beyond them, Coast Guardsmen walked with canines up and down lines of commuters waiting for ferries to take them home to the East Bay.

Though officials say they are not conducting sweeps to push some of the city’s estimated 7,000 homeless people out of tourists’ view, at least one city lawmaker and organizations that support the homeless say they’ve heard several reports to the contrary. “Not just from one person or two, but a lot of people,” says Jennifer Friedenbach, executive director of the Coalition on Homelessness, the main organizer of Wednesday’s protest. She alleged that homeless people are being cleared from encampments, ticketed for “sitting or lying” and illegally searched. “People are just really upset,” she says. “We can spend all this money for a corporate party. And we can’t take care of our poorest residents?”

Friedenbach, like other progressive leaders in the city, says the NFL should be refunding the city for the taxpayer money being spent on things like increased police presence and amped up transit services. (Most of the amusements themselves are directly sponsored or paid for by funds raised by the Super Bowl Host Committee.) Dozens of officers stood stoically between the protestors and Super Bowl City on Wednesday, decorated with long batons, helmets and zip ties.

City officials like Mayor Ed Lee, an unpopular figure at the protest, have argued that the city stands to earn much more than it has spent on the Super Bowl — in hotel taxes, broader economic impact and the publicity the Bay Area is getting from hosting one of the world’s most high-profile sporting events. He and other local lawmakers have spent millions — $167 million was earmarked for homeless services in the last city budget — and proposed that the city spend millions more, on affordable housing and centers to help homeless people get off the street and into beds.

“We’re definitely not saying the city is doing nothing,” says Friedenbach. “We just need them to step it way, way, way up.”

Yet the money spent on Super Bowl festivities was, in some ways, just a detail. The contrast between the homeless and the glitzy promotional circus surrounding the game ignited passions about broader inequality. Some protestors were blaming tech companies for skyrocketing rents that are pushing middle-class residents out of their homes. Others were demanding justice for Mario Woods, a young black man recently killed in a police shooting in a relatively poor part of town.

And more protests are planned for the week leading up to the Super Bowl. City officials have sent out advisories about an Uber driver protest planned for Sunday, for example, during which drivers angry about the control the company has over pricing have vowed to clog the highways around Levi’s Stadium in Santa Clara, where the actual game will be played.

A hospital worker named Kristen Korkos, whose husband is a taxi cab driver struggling to make a living in the age of Uber, swept her arm at Super Bowl City and called it obscene. “I have all this anger,” she says. “I had to come down here, to experience what it used to be like to be a San Franciscan.” Near her was a veterinary technician named Nikki Millett, holding a sign said “No Penalties 4 Poverty.” 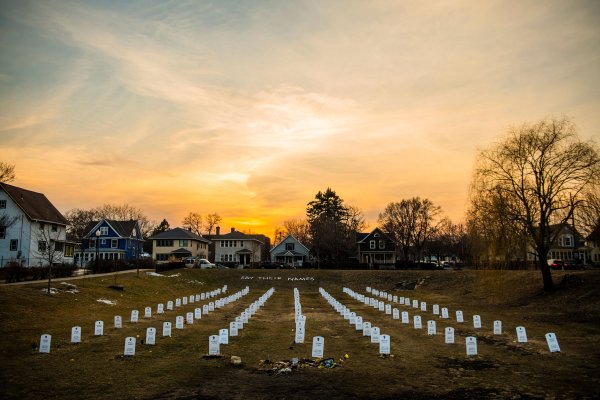