How Ted Cruz, Bernie Sanders and Other Men Play the Gender Card

This morning, MSNBC aired a segment in which Hillary Clinton’s voice, once again, was the topic of criticism. “She shouts,” said Bob Woodward. And yet, nobody talked about the loud voices, shouting, podium-slamming, deranged expressions and bombastic anger of the male candidates — all of them. Some of those men are, in fact, playing the gender card.

But every time a male politician takes a debate pee break, when he takes a pass on make-up, or walks around Spanx-free, he’s playing a gender card. When he maximizes airtime to convey serious ideas to a national audience instead of having to bite his tongue and smile politely while answering ridiculous questions about flower arranging — gender card. When he raises his deeper, more “serious” voices — another.

Read next: Why You Should Take Your Personal Life As Seriously As Your Career

The real ace in the hole though is when male politicians leverage their and voters’ anger. The GOP is running on a “vengeance is mine” platform, while Bernie Sanders is an expert at knowing when and how to use anger for political gain. Anger is a manly thing. It’s the trump card in this cycle and a gendered competitive advantage, given the finite ways that women have to tiptoe around without expressing righteous ire, impatience, frustration, irritation, or caustic humor, especially if they are black. Anger in a man doesn’t make the world wonder out loud if his hormones have taken over his brain and rendered him an incoherent idiot who can’t be trusted with Important Things. How many words for “angry” men are there? Ones that have the powerful and controlling cultural resonance of yelling, and shouting, b-tch, nag? Or, yep, shrill.

It takes time, effort and will for women to calibrate themselves constantly to gender roles that undermine their public ambitions. It’s difficult for a woman politician to be authentic, or, as Woodward put it today, to be “comfortable” with herself when she is actually an affront to people’s gender expectations. On the other hand, men intrinsically, “naturally,” confirm and exploit those expectations.

These ideas are firmly and destructively established in childhood. A recent study of teen attitudes conducted by Harvard’s Graduate School of Education, found that the high school students most likely to be elected to student government are white boys. The least likely to be trusted to lead? White girls, who were also the least likely to support one another. Young girls of color, more alienated from the vicarious access to power that white girls enjoy, are more confident, politically efficacious, and trusted as leaders.

Illustrating the relationship between bias, power and gender doesn’t paint women as victims. It’s simply describing the way social norms work to reproduce systemic inequities. But in order to effect change in that system, we have to admire and laud women for agency, ambition and aggressiveness, and, yes, loudness, which remains difficult for many people.

It’s true that women in powerful positions are more visible today than ever before, signaling a real social change in acceptance for women with public authority, particularly in progressive spaces. It’s simultaneously true, however, that gender stereotypes result in women still facing significant obstacles to recognition of their leadership. The occasional reference by a woman candidate to her sex hardly counts as an overturning of this reality. Male presidential candidates don’t have to be overtly sexist to benefit from systemic misogyny. But if they are genuine about equality and women’s rights, they should acknowledge that they do. 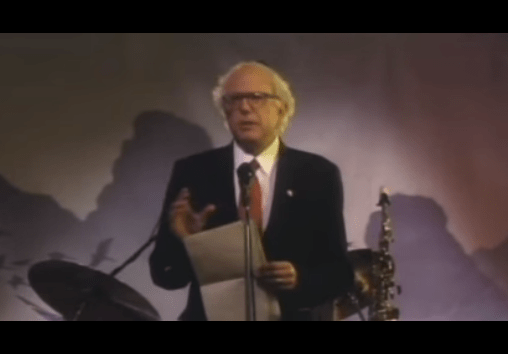 Bernie Sanders Played a Rabbi in a 1999 Low-Budget Film
Next Up: Editor's Pick