A new ad for Bernie Sanders set to play in New Hampshire appears to suggest that two regional newspapers have endorsed the Vermont Senator when in fact, they have not.

Sanders’ 30-second campaign advertising spot, playing less than a week before the key New Hampshire primary, cites glowing praise from the regional Nashua Telegraph and The Valley News alongside organizations that have endorsed Sanders. But the Telegraph and Valley News have not endorsed him—a fact that is not shared with the viewer.

In the version set to broadcast on New Hampshire airwaves, a woman’s voice intones, “From postal workers to nurses, he’s been endorsed for real change.” The voice continues: “Bernie Sanders, endorsed by Friends of the Earth Action as a bold, fearless voice for the planet. The Nation endorses Bernie, saying, you ‘can trust Bernie because he doesn’t owe his political career to the financial overlords.”’

Then, the woman’s voice continues without a clear transition: “The Nashua Telegraph declares, ‘He’s not beholden to Wall Street money.’ The Valley News says ‘Sanders has been genuinely outraged by the treatment of ordinary americans for as long as we can remember.’”

The praise cited from the Valley News and Telegraph follows the same format and language as the praise from the organizations that have endorsed him, without any clarification to the New Hampshire viewer to suggest those two papers have not.

The editor of the Telegraph, Roger Carroll, said that the paper did not endorse Sanders and called the Sanders ad “deceptive.“

Devine, who is responsible for advertising, said that he did not believe the advertisement was misleading, and said it was clear the ad merely cited praise from the two papers. “I think we have a perfect right to use things that have been used publicly in newspapers and make reference to them,” Devine said. “Our intent is absolutely not in any way to mislead.”

Sanders’ advertisement comes onto the New Hampshire airwaves as Sanders and Clinton jockey for important local endorsements as part of the race toward the Granite State primary on February 9. Clinton has already swept up most of the media endorsements in the state, including the Portsmouth Herald, the Concord Monitor, the Keene Sentinel and the Conway Daily Sun.

The Boston Globe and the New York Times, both of which are influential regional newspapers in Hew Hampshire, have also endorsed Clinton.

It isn’t the first time Sanders ads have suggested that he was endorsed by a regional paper. An ad running last week in Iowa cited praise from the Des Moines Register, without mentioning that the paper endorsed Clinton, the New York Times reports. Newsweek reported last week that Sanders’ campaign was using logos on its fliers from groups that had not endorsed him, including the League of Conservation Voters and the AARP. 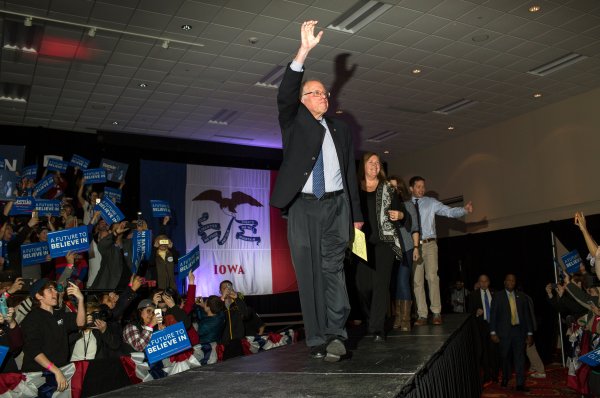 Sanders Stokes 'the Bern' in New Hampshire
Next Up: Editor's Pick