The Surprising Fear That Created the USO

It was an alliance that changed the course of World War II and the face of warfare in the United States—and it involved no treaties, governments, or weapons. It began 75 years ago today, when six civilian organizations joined forces on behalf of the U.S. military and, armed with only coffee, doughnuts and goodwill, created the United Service Organizations, a juggernaut mightier than any enemy.

Though the USO eventually became known for its entertainment, the organization has serious bureaucratic roots. It came to be during the United States’ mobilization for World War II. Though the U.S. hadn’t officially entered the war yet, Europe and Asia were already deeply involved and, in September 1940, President Roosevelt had approved a military draft. It was the first time a draft had been put in place during peacetime, though Roosevelt and his advisers knew that peace could not hold for long.

By February of 1941, over 1.1 million people had enlisted, and a new challenge had presented itself: the United States had to meet the challenge of housing a dramatically expanded military that was stationed at home indefinitely. Officials and citizens alike fretted about what would happen as more men volunteered or were drafted. How would towns adjacent to military bases cope? How would then men fare while they waited? What was the best way to rein in the power of the waiting ground force as it prepared for the bloodiest war in history?

Roosevelt’s solution was to bring together existing civilian service organizations on behalf of the military. In 1941, he requested that the YMCA, YWCA, Jewish Welfare Board, Salvation Army, Travelers Aid Association of America and the Salvation Army join forces to give soldiers on leave opportunities for recreation and access to other civilian resources. A Congressional charter ensued and on Feb. 4, 1941, the USO was born.

Within weeks, the organization was taking root all over the country. The USO put out pleas for money, reminding Americans that “it’s thoroughly American that the leisure-time needs of the military forces should be met by the people themselves, instead of through government regimentation.” Church halls, abandoned buildings and even private residences were transformed into USO centers where service members could get coffee, a doughnut, books and postage, conversation, dancing and even vacation-like recreations. Fundraising efforts were designed to appeal to homefront parents, who were reminded that USO centers were alternatives to what one ad called “smoke-filled juke joint[s].” The organization raised over $16 million in its first year—the equivalent of more than $250 million today.

That effort was helped along by fears that military men’s other recreational alternatives were lewd and dangerous. In an article on venereal disease published the month after the USO was founded, a Navy medical corps officer worried that the virile armed forces faced a threat even more ominous than liquor or prostitution—“a girl on the street who likes a man in uniform.” Enlisted men, he feared, were susceptible to the warm comforts of loose women who would ply them with alcohol and seduce them into bad habits and diseases like syphilis and gonorrhea.

To that end, the USO made sure its centers were squeaky-clean. They did not serve alcohol, and were often run by married women who served as matrons and did everything from acting as chaperones to doling out food and advice to servicemen. But for many soldiers, the real attractions of the centers were the “junior hostesses” who were on hand to dance and socialize. (These women were subject to strict morality checks, and many saw the USO as a parent-sanctioned place to mingle with men.) Some USO canteens were segregated, but others welcomed African-American soldiers and hostesses.

The USO didn’t just serve soldiers at home, though. After the war began and troops were shipped all over the world, the USO followed. The group began to organize “camp shows,” entertainment extravaganzas that involved visiting entertainers who waived their fees for the chance to show their support for troops in person. In camps all over the world, entertainers like Bob Hope, The Andrews Sisters and even John Wayne strutted their stuff for enormous crowds of homesick servicemen—over 7,000 entertainers and over 425,000 shows between 1941 and 1947 alone.

The camp shows were such a success that they were quickly spun off into their own nonprofit, USO Camp Shows, Inc. And military enthusiasm about the USO was so raucous that a short film about a USO canteen starring a young Ronald Reagan was almost pulled from distribution by the Army, which objected to its portrayals of men literally jumping with excitement and fighting for the chance to take showers and rest in comfortable chairs. “The Army feels this is not good for civilian morale as it implies that there are no showers or other comforts for soldiers in military camps,” wrote Thomas M. Pryor for the New York Times in June 1942.

More than 1.5 million civilian volunteers gave their time to the USO during World War II—service that helped support and uplift troops before, during and after some of history’s bloodiest battles. When the war ended, the organization temporarily disbanded until the Korean War, when it was reorganized. Today, the USO has over 160 volunteer-staffed centers worldwide and even its own Congressional caucus.

The USO’s story isn’t all Saturday night dances and smiling faces: Dozens of performers died during and because of their volunteer service, and the organization by default supports troops who face down injury and death while defending their country. The reality of war is grim, but that doesn’t mean the act of supporting troops has to be. What started as a way to rein in the appetites of enlisted men has become part and parcel of the way Americans see—and care for—the military. 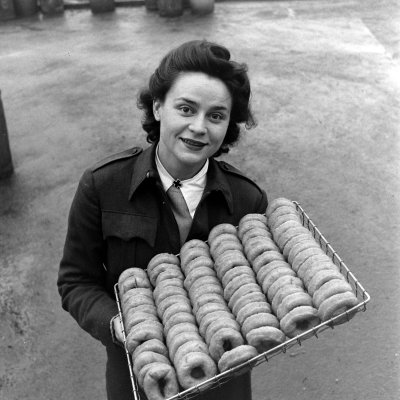 The Surprising History Behind National Doughnut Day
Next Up: Editor's Pick