Inside Brazil's Endless Battle Against Mosquitoes

The Recife neighborhood of Nova Descoberta is an area where mosquito-borne diseases are common and prone to spreading. This is why close to ten health and municipal workers from the city are carefully walking through its streets, spraying the colorful shanty homes and foliage, and pouring insecticide into sitting water to kill mosquito larvae.

Two of the workers wear dark blue body suits and facemasks, and carry a fumigator on their back that sprays potent chemicals to kill the mosquitos. The duo, along with several other health workers in bright yellow hats, walk along the garbage lined neighborhood streets and pay close attention to deep trenches alongside the roads with slowly moving water. The workers also check large blue water containers, which residents frequently use since they often only have running water for three days or so a week.

“Depending on the area, there’s a big difference in the response,” says Diego Almeida, a 25-year-old biologist who is suited up and spraying the outside of the homes. He says he’s exhausted, and his suit is wet with perspiration. It’s not an easy job in the 85-degree heat. Not to mention it rained lightly today, and the air is thick with humidity. “The people who live in these neighborhoods and have nothing are the most welcoming.”

The fumigator releases a loud buzzing sound similar to a leaf blower as well as a strong scent of chemicals and burning. Some men and women come outside to watch, while others peak out from their windows and move their laundry from their clothing lines. Often soldiers join the neighborhood spray teams, since the health workers say they are overwhelmed by the amount of work the city is calling for amid the Zika outbreak.

Hardly any of the homes in Nova Descoberta have screens, or any sort of barrier to keep mosquitos out. The children come to watch the workers on their bikes in little clothing and flip-flops. “Do you know how to fight the mosquito?” Recife government worker Luciano Vila Nova de Andrade asks a growing crowd of young kids. He hands out pamphlets to the children as they call out strategies, like covering large tubs of water and making sure trash is properly thrown away. Even a bottle cap is enough for mosquito larvae. He reminds them to tell their friends, too.

Rubem Dutra de Arruda, a resident of the neighborhood says he knows at least six people on his street who are infected with some sort of mosquito-borne disease. His own mother is bed-ridden, suffering a case of chikungunya. “We have to unify as a community,” he says. While some members are committed to preventing diseases like Zika, he says there are others in the neighborhood who don’t follow the recommendations as closely. He’s always looking around for potential water carriers that mosquitoes could lay eggs in.

As the sun goes down, the workers pack up their tools and hand out educational materials about how to decrease their risk of contracting one of several severe mosquito-borne illnesses, including Zika.

Almost immediately one of the children watching the action tosses an empty bag of chips onto a puddle on the side of the road. 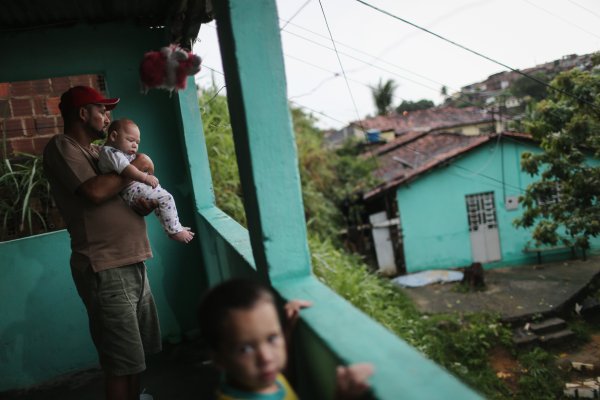 The WHO Has Not Done Enough to Fight Zika
Next Up: Editor's Pick